When President Katsuyuki Ohtomo of Asahi University, Japan, led a university delegation to the 2019 South Africa-Japan Universities Forum (SAJU 2019) to discuss partnerships, programmes and future possibilities, there was one university they had to visit in person: the University of the Western Cape (UWC).

It was a natural fit. Both UWC and Asahi (and its sister university, Meikai University) have a long history of research and teaching excellence, particularly in dentistry - last year, UWC celebrated 40 years of dental graduates, and Asahi was founded in 1971 as Gifu Dental College (by President Ohtomo’s grandfather-in-law, as it happens - a dentist himself, while President Ohtomo is a specialist in orthodontics).

“Four years ago I visited Japan, and was very impressed with Asahi University,” said Professor Yusuf Osman, Dean of Dentistry at UWC. “This is a good time for us to touch base, and an opportune moment to explore our relationship going forward. Thanks very much for making time to meet with us.”

Drs Hiroshi Sakagami, Shu Fujiwra and Akitoshi Katsumata,, and Izumi Den, Secretary to President Ohtomo, comprised the rest of the delegation, who were delighted to be given a tour of UWC, and to meet with staff from the Faculties of Community and Health Sciences, Dentistry and Science.

UWC Vice-Chancellor and Rector, Professor Tyrone Pretorius, welcomed the delegation to the University, encouraging them to make the most of their visit.

“It’s good to have you on campus, and I’m sure we have a lot to learn from each other,” he said.

He also had a special request to make. 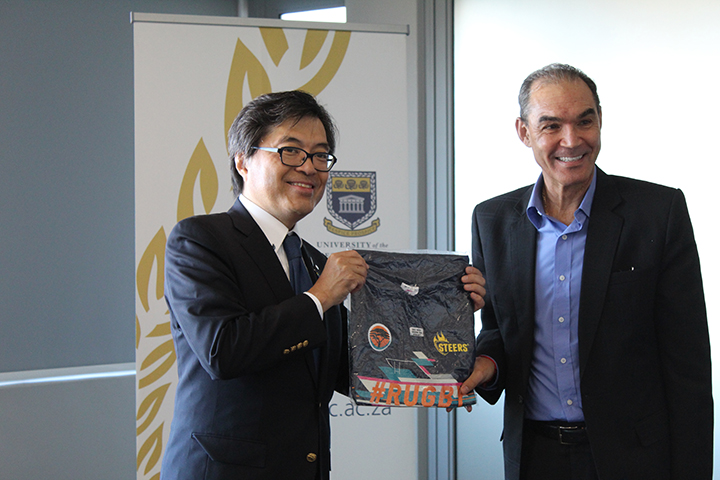 “Any chance you can get me a ticket to the Rugby World Cup? I’m sure we can do an academic exchange around that time.”

Prof Pretorius wasn’t alone in his request, and both universities share a special love for rugby, and for UWC Rugby Coach - and Springbok legend -  Chester Williams.

Coach Williams, who led the University team to their Varsity Cup debut earlier this year, was instrumental in bringing the two higher education institutions together - as a South African tourism ambassador, he held a coaching clinic at Asahi University long before planting his flag at UWC.

“We’ve known our friend here for many years,” said President Ohtomo. “This friendship is close to my heart, and it’s good to see him here, building up the next generation.”

For Williams, the feeling is mutual.

“It’s been a long relationship, and it’s not a surprise they made it out to South Africa for a visit - or that they’d be visiting UWC. But it’s nice that I get to see them now, when I’m working at the University, and to be able to show them the sights and repay them for their hospitality. I’m sure we’ll be seeing a lot more of each other - especially around World Cup time.”

“Thank you for having us,” President Ohtomo concluded. “Hopefully next time we’ll be able to stay for longer - for more sport, and less business.”

Posted on
28 May 2019
Author
Nicklaus Kruger