When Chaka Mofokeng and Tekano Mbonani returned to Leseding Secondary High School in the Free State, they were greeted with a full house - more than 120 learners packed the hall to hear the two young astronomy researchers talk about their studies and career prospects, and the joys of astronomy and science.

“When I’m home for the holidays, I often end up helping matrics with maths and science - and they would ask question about why I’m studying astronomy, and where I’m going to work after finishing my studies,” Mofokeng explains. “I realised that even now most people back home still do not have an idea of what astronomy is all about.”

Chaka’s studies are supported by the Institute for Data-Intensive Astronomy (IDIA), an inter-university collaboration that works to help deal with the massive amount of information astronomers have to handle - and also works to grow science ambassadors with outreach skills. Together, the friends approached IDIA for some materials and a bit of outreach coaching.

“We got together and decided that we wanted to reach out to the people back home,” Chaka explains, “and to bring an understanding of what makes astronomy so amazing, and the possibilities that studying astronomy opens up. We wanted to invite them to think about the big picture, the future and how to be a part of it.”

In July last year, the MeerKAT radio telescope was inaugurated in the Karoo. The MeerKAT is the first step to the international Square Kilometre Array (SKA) telescope project, but already it is one of the best radio telescopes in the world, and has placed South Africa firmly on the world map of radio astronomy and engineering.

Investing in the MeerKAT has meant giving over a thousand bursaries through the SKA South Africa Human Capacity Development programme (among others). Young scientists like Mofokeng and Mbonani have the opportunity to be part of MeerKAT science projects through their studies, using machine learning and other skills high in demand in today’s world.

This initiative, started by two bright young scientists, hopefully marks the beginning of many more events of this kind.

“We want to promote science through outreach events and activities,” says Mbonani. “Using science- and technology-based activities and events, such as stargazing at an observatory or exploring the universe in a planetarium, we want to attract these future secondary graduates. We also provide mentorship, hoping to help them improve their academic performance in matric.” 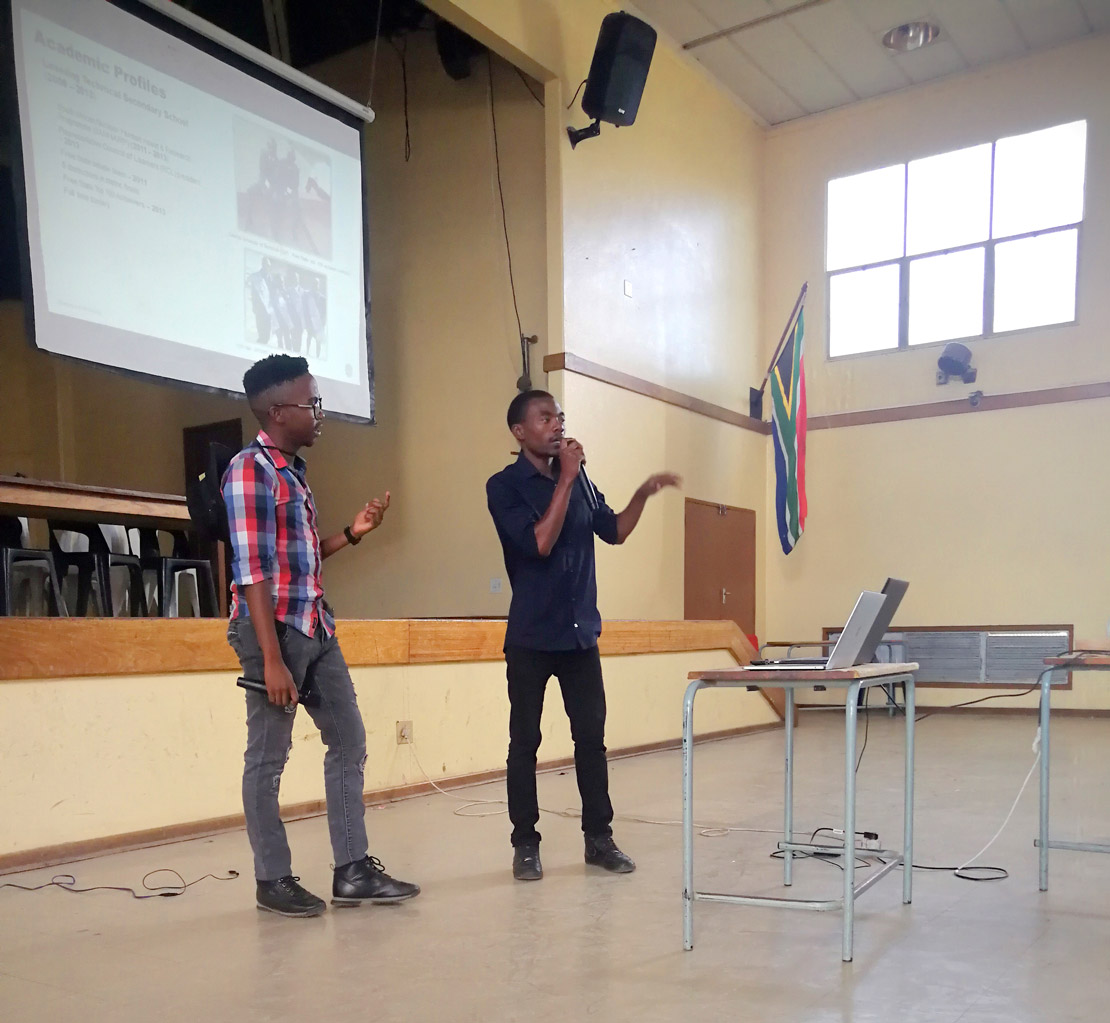 Reaching Out To The Stars (And Back To School)

For a whole morning, Chaka and Tekano spoke, in both English and Sesotho - about their journeys, about science, about the skills scientists acquire during their studies and all the opportunities such studies open up in an age where the 4th Industrial Revolution is predicted to radically change the world we live in.

Most of the Leseding  learners had never previously attended a science outreach event. Naturally, they had lots of questions: about how long it takes to study astronomy, and what astronomers do, and where they work in South Africa - and how much they earn.

“As an astronomy research student I have gained skills like data analysis, mathematical modelling, communication and writing, programming and teamwork, among others. These are a requirement for most companies and institutions,”  reflects Mofokeng.

“With the unfolding of the 4th industrial revolution, such skill sets make young and aspiring scientists perfect candidates to make the most of future opportunities - wherever they find themselves, they’ll be able to make a real difference.”

But there’s more to astronomy than just  skills and employability.

“The most interesting thing about astronomy is getting to travel the world to meet a diverse group of scientists, getting to share information and use the best telescopes in the world with the aim of answering most basic questions in astronomy and in life - how the Universe formed, where it’s been and how it’s evolving.”

So far, the bridge building has gone well - the learners were inspired by the young scientists’ stories, and nearly half of them said they could see themselves pursue a career in science.

“Now that we have successfully had our first event, we will be arranging to have upcoming events in other high schools throughout Welkom and eventually the whole of Free State,” Mofokeng notes

And already, the two talented friends are planning their next trip home...and how to help bring more of their peers to the stars.