“For decades, Hip Hop culture has redefined the sonic landscape, musical genres, pop culture and identity politics. Hip Hop has come to define not only what it means to be cool - the clothes we wear, the cars we drive and the beverages we drink. It’s even in our activism. Hip Hop has provided a form of rear-guard activism in South Africa, from helping to fight apartheid to expressing struggles against poverty, drugs and worse.”

Quentin Williams, the eldest of four boys, grew up in Bishop Lavis. He never thought he would enrol at a university because his family could not afford it. And he never imagined he would leave the working class entrapments of Bishop Lavis. But he did.

Now Williams is a senior lecturer in the Linguistics Department at UWC. He’s a sociocultural linguist working on extending an approach to multilingualism, culture and society, postcolonial pop culture, and linguistic agency in South Africa and beyond. He performs academic research and writes journal articles.

He’s also really into Hip Hop. He’s written articles about it. He’s written books about it. And now he’s joined with three more of South Africa’s foremost Hip Hop scholars to bring about the ultimate collab.

Here’s what Quentin has to say about remixing Hip Hop, academia and activism...

What got you interested in Hip Hop in the first place?

I was always a huge fan of Gangsta rap music, and growing up in Bishop Lavis, it was all around us.

But academically, my life-changing moment came when I happened upon, in the library, Adam Haupt´s MA thesis on Prophets of Da City. I must have read that thesis more than four times. After that I knew I wanted to complete a thesis on Hip Hop language. No, I wanted to write a book on Hip Hop language, and help shape the field of Hip Hop studies, and tell the amazing stories of Hip Hop.

How do Hip Hop and activism mix?

Since the 1980s, when Cape Hip Hop infused its activism with Black Consciousness and the principles of the Nation of Islam (NOI), amongst other things, to help fight against apartheid, Hip Hop has become the go-to cultural practice for a post-70s generation of multilingual speakers in South Africa. 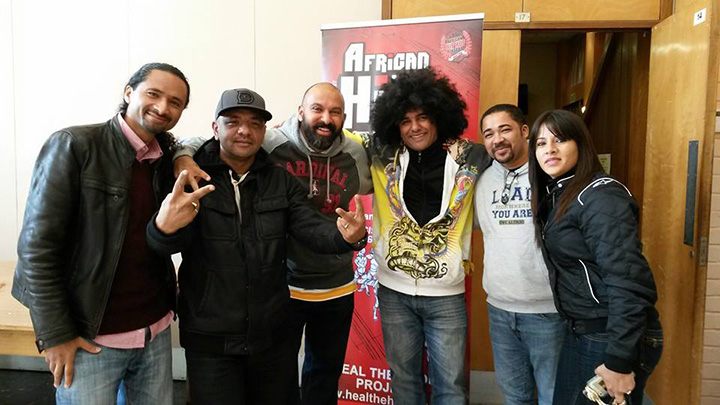 It supports other activist groups in South Africa by spreading the message of non-racialism through music, dance, graffiti and turntablism (the technical art term for mastering and performing deejaying). So, in a sense, if South African activism generally has a front line component, Hip Hop helps it along with its rear guard approach.

What's the most important idea you'd like readers to take away from Neva Again?

That for decades now South African Hip Hop studies have been in the making. That this book is not solely an academic enterprise, but a Hip Hop community endeavour. That this book is not a representation of a canon, but a work in progress - one that will eventually capture space for SA Hip Hop studies at university and school level, and lead to the wider institutionalisation of Hip Hop studies. That Hip Hop in South Africa has a powerful and important past, present, and future.

What's the most interesting part about editing a book?

I think, especially with this book, the most interesting thing is the creative input from the editors and artists. I‘ve worked with other academics on edited volumes, but my co-editors are the most creative and intellectually inspiring group of writers I´ve worked with. We also had lots of fun producing the album that goes with the book.

How did you go about researching the subject?

In a sense we drew first on our research experience and published work - after all, each of us editors has for the last decade conducted research in South Africa. But we didn’t want to produce a boring, dry, academic book for an academic audience. We thought bigger.

So we set out to conduct panel discussions and interviews, we wrote journalistic pieces and academic articles with Hip Hop artists, and that helped us consolidate sections and themes of the book based on more than a decade of research. We then hosted the first Heal the Hood Hip Hop Lecture series at UWC. This was followed by a second and a third (the Lecture series now runs every year alongside the African Hip Hop Indaba), and from there we invited Hip Hop artists to contribute chapters.

And the rest is history.

What’s your favourite part of the book?

It’s all good - but I really like all the contributions by our female and queer emcees. They demonstrate how far or not Hip Hop has come. I also love the dope pictures handpicked by our Director of Photography, Ference Isaacs; they really bring the book alive.

When it comes to Hip Hop, what speaks to you personally? What inspires you?

It is the way in which creativity, innovation and an inclusive idea of multilingualism are combined that truly inspires me.

Every G-funk Hip Hop artist produces music that speaks to their own lived realities; whether it is a Youngsta CPT in Cape Town, YG in the United States or Musta Barbaari in Finland; they all have a story to tell.

It is in that story that we hear and see the signs from the future for language change, transformation, agency and citizenship.