“In the darkest days of apartheid, students took a hand in history and fought for justice. There were no guarantees that they would see a better world themselves. They did it because of their love for their people. And they did it so the next generation would see that better world. And the world will never forget what they did - and what the University of the Western Cape meant, and has come to mean.” 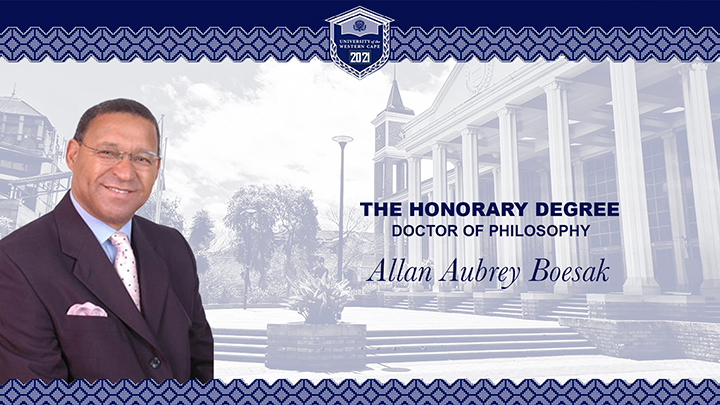 Dr Allan Boesak was speaking at the University of the Western Cape’s (UWC) Spring Graduation 2021 - a virtual celebration of student success on 17 September 2021, where he was awarded an honorary doctorate for his work as a world-renowned anti-apartheid activist, liberation stalwart, seasoned scholar, gifted cleric, civil-society and justice activist, and liberation theologian.

(Watch the University of the Western Cape’s first virtual graduation ceremony for 2021 here.)

Dr Boesak is already in possession of 14 honorary doctorates from a range of institutions all over the world - but this one, he said, is special.

“This is not just my alma mater,” he said. “This is the place where a generation of students had found themselves an academic home. And they made of this academic home, over the course of a decade or more, the home of the revolution in the Western Cape, and the heartbeat of the struggle in our country, and in the international arena.”

He ought to know. He was one of those revolutionary UWC students, graduating from the Dutch Reformed Mission Church Theological Seminary at the University College of the Western Cape in 1967 - and has become renowned for his contributions to public life in South Africa and the international community for almost 40 years.

Through years of protest the university transformed itself, rejecting apartheid and becoming an intellectual home of the left that would prove instrumental in fighting for a democratic South Africa. After helping to forge South Africa’s constitution in the 1990s, UWC has gone on to produce graduates and research with real-world impact, and become an internationally-respected centre of learning, research and community engagement.

And it did so despite its origins as an institution set up by the apartheid government to produce coloured clerks, as fellow Honorary Doctorate recipient (and literary chronicler of the pernicious effects of the apartheid regime) Prof Zoë Wicomb pointed out.

“Fifty-three years ago I graduated from UKWK, then a “Bush college” designated for coloureds - even one with average matric results, like myself,” she recalled. “There was a stigma attached to Bush - and justifiably so. Some teachers simply read out the UNISA lecture notes that we regurgitated in exams. There were no seminars or tutorials, and the only Black lecturer was Adam Small.” 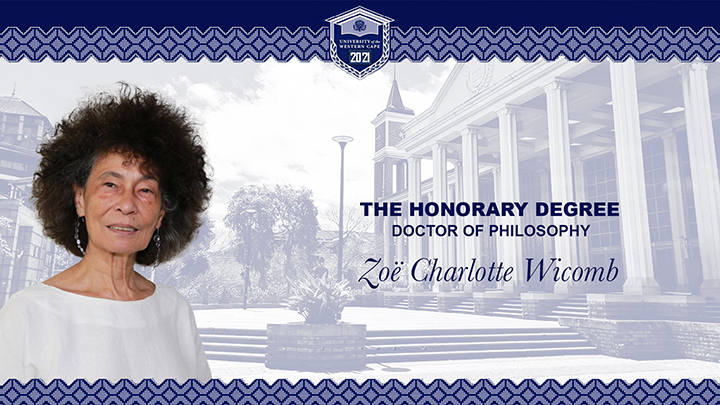 Nowadays, Prof Wicomb has a claim to being one of the most significant authors of late-apartheid and post-apartheid South Africa, and is perhaps the most accomplished novelist and short-story writer ever to have been a student at what is now the University of the Western Cape.

But her first lesson in irony came not from literature, but from how the apartheid government laid the seeds of its own demise in institutions like UWC.

“But the policy consumed itself from within, and produced dissent. Herded together, we questioned the silence of our parents, cowed by draconian laws. But we could speak to each other, without the racial inferior-superior opposition that apartheid fostered.  And in the Eastern Cape, Steve Biko was well ahead of us in inspiring black students to act. Thus education asserted itself after all: The Bush colleges transformed themselves against the vision of apartheid.”

Building A Better Future - Through Hope And Action

But the University’s work is not yet done. These achievements come in a time of unprecedented change, when higher education - and our world, and our lives - have been disrupted by changing technology, climate change and a global pandemic.

In South Africa, as Statistics South Africa reports have shown, unemployment is at 32.6 percent and youth unemployment is 46.3 percent, according to this year's government statistics. More than 13 million children receive the government's Child Grant; 2.8 million children (aged up to 17) experience hunger weekly, and 600 000 do so every day; and more than six in every 10 children are multidimensionally poor. It’s one of the most unequal nations in the world - and COVID-19 has brought new challenges to the mix.

“So this is my call to you today – become part of a new struggle,” said UWC’s Rector and Vice-Chancellor, Prof Tyrone Pretorius. “Rebuild our country. Use your talents, determination and courage to fight for real freedom in our lifetime – economic freedom and an end to poverty. Make it your mission in life to reach out your hands to those who have been left behind and pull them up with you. Leave no one behind on the battlefield of poverty. Use your success to inspire others in the villages, townships and towns where you grew up.”

Prof Wicomb urged graduates to think of graduation not in terms of social and economic advancement, but as a step towards broadening knowledge and creating a platform for change.

“South Africa, with its many cultures and languages, offers unique opportunities to widen our experience and reassess social practices,” she noted, “to think of knowledge in more creative terms, as a tool for further social transformation. Then our degrees would give us the confidence to consider also the displaced peoples of the world, to address poverty and inequalities, and to open our minds, which also means opening our arms to welcome the stranger.”

It’s a big task, but it’s one that UWC is uniquely prepared for - if we have the moral courage to embrace our roles in working to create a better society.

“Your parents' generation, your grandparents' generation, and those who went before them, all stepped up to overcome huge, seemingly impossible challenges,” said UWC’s Chancellor, Archbishop Thabo Makgoba. “Against enormous odds, they made extraordinary sacrifices, defeated a cruel and evil system, liberated our nation and birthed a democratic nation. I have no doubt that you can show similar moral courage, resilience and determination and overcome our current challenges. I believe that you can not only make the difference necessary to create a new, better society, but that you can be the difference.”

Every graduate, at every level, no matter their background or their achievements, will have a role to play in creating a free and fair society

“This struggle asks that you stand up for what is right and strengthen the country of your birth with your skills, talents and commitment,” Prof Pretorius said. “I believe in you. I believe that you share the resilience, determination and pride that this university of ours embodies. We are proud of what you have achieved and we know that you will continue making us proud.”

The University of the Western Cape is celebrating the achievements of thousands of its students at its September Graduation 2021. If you have a UWC success story about UWC graduates who are making a difference in the world, share it at ia@uwc.ac.za - and help highlight UWC Excellence.