There are a lot of jellyfish species known to science, and now, thanks to University of the Western Cape (UWC) marine biologist and taxonomist, Verena Ras, there’s one more.

“Historically, two species of Chrysaora jellyfish are known from the Benguela Current Ecosystem: C.fulgida and C. africana. However, a third morphotype is now seen which bears a resemblance to both,” Ras says. “And now, using a comprehensive collaborative approach analysing statistical and molecular data, we’ve officially discovered a new species of jellyfish in South African waters: Chrysaora agulhensis.”

The species, which appears to be endemic to the Agulhas current system (hence the name) is described from 31 specimens, mostly collected in False Bay in the Western Cape. The species can be readily separated in the field by a combination of tentacle/lappet number and shape, colour patterns and the form of the oral arms.

Ras is currently completing a PhD in Marine Genetics at UWC, looking at the identities and population biology of West African jellyfish. But she has been working on jellies for eight years already, having started some of the work as an honours student and continuing as part of her Master's at UWC in the Biodiversity and Conservation Biology Department.

“Data for African jellyfish species – or species found along the West and East African coastlines, rather – is relatively non-existent,” she explains. “The main purposes of my work among the broader research conducted within our group is to begin to ‘fill this gap’ by providing updated descriptions of African species, as well as barcoding their DNA and investigating their population biology and ecology.”

Chrysaora has always been a highly enigmatic genus, and sorting out the species required a coordinated effort combining the fields of marine biology, genomics, oceanography and more, under the leadership of UWC’s Professor Mark Gibbons. Prof Gibbons is Ras’ marine biology mentor.

“We’re a wonderfully multifaceted team, all with our own areas of expertise ranging from molecular biology to oceanography,” Ras explains, “so nothing ever becomes monotonous, and there’s always something new to learn or investigate.”

The inherent interdisciplinary nature of the work has kept Ras enthralled - and on her toes.

“In my short time involved in this research I’ve been trained in conservation techniques, marine biology, histology, genetics, molecular biology, microscopy and biostatistics, to name a few,” she says. “This keeps the work interesting, and allows me to transfer skills to many other domains. I’m now drawing on skills in GIS (geographical information systems) and programming to answer some of our current questions.”

That’s not the only thing she’s been learning, though.

“One thing I’ve learned, clichéd as it may be, is that you should always just keep going. When things fall apart, when you hit bumps in the road, when you fail over and over again, you just keep going. Eventually that will lead you to where you need to be.”

The study, appropriately titled There are three species of Chrysaora (Scyphozoa: Discomedusae) in the Benguela upwelling ecosystem, not two, is her first official published academic article.

“It took me four years to complete my BSc, three years to complete my MSc and I am in the fourth year of my PhD, because I had to work multiple jobs to pay for my studies - and although I've been in research for years this is my first publication,” she says. “So it’s never too late - just keep going, and let’s see what you can do!” 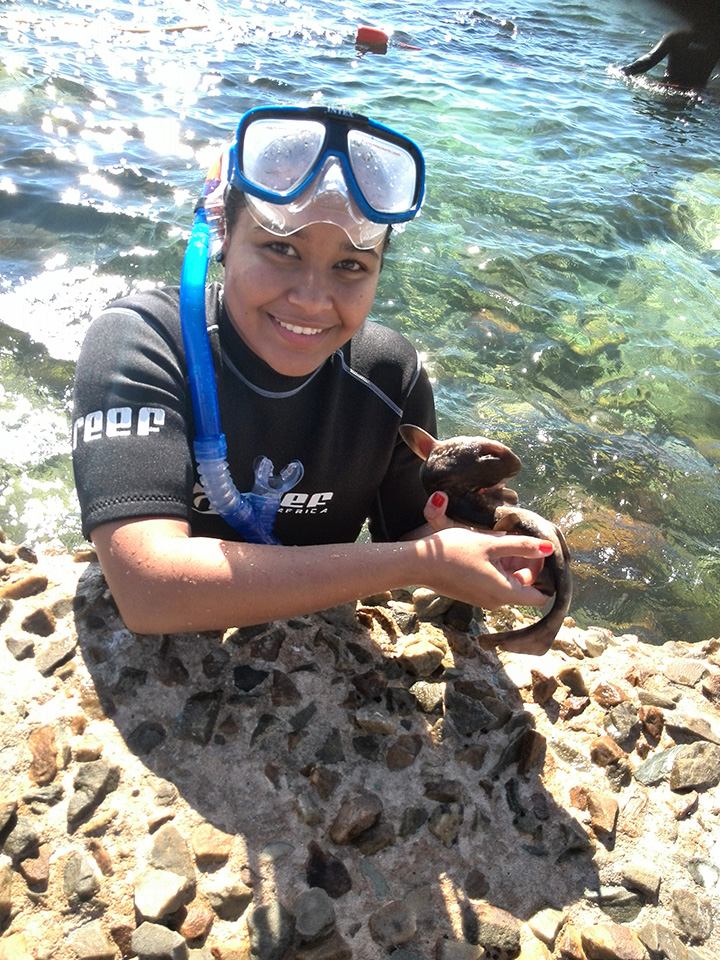 From Sea To PhD: Learning While Earning, And Leaving A Legacy

Ras’ passion for all things marine began long before she got to UWC. Growing up on the Cape Flats, Biology and Geography were her favourite subjects, and the ocean was part of her heritage.

“My parents weren’t well off, and they valued education, but never had the opportunity to pursue tertiary education - but they really started my career in science and marine science,” she says. “I come from a family of big fishers, and I grew up at sea – line fishing, crayfishing, spearfishing. That sparked my passion for the ocean, and just drove me to want to know more.”

It’s a passion she’s pursued in her studies and elsewhere - she’s actually been doing her studies part-time, working full-time in a variety of related positions.

She has been a tutor, a course coordinator and an associate lecturer at UWC, a lab technician, has collected museum specimens, and been a web administrator for the Inter-University Institute for Data Intensive Astronomy and UWC’s Astrophysics Group.

And now she’s working – still full-time – as a scientist and trainer with the University of Cape Town and H3ABioNet - a pan-African Bioinformatics network.

“My main role at H3ABioNet is to coordinate, develop and deliver bioinformatics training across multiple African countries,” she says. “We try to use unique approaches, online and in person, to deliver training to as many countries as possible, and do our best to overcome some of the challenges African institutions often experience.”

Communicating science is something that comes naturally to her - and something she hopes to do more of.

She’d also like to send a message to young women, who are still very much under-represented in the sciences - particularly in genomics, and even more so in marine biology, where there may be only one female scientist on a ship at a time, and few role models for young girls.

“Just by being at sea or doing marine science, we can expand the options young women can imagine for themselves,” Ras concludes. “And that way we can leave science – the environment, the culture of science – better than it was when we entered that environment. We can leave a legacy.”