All areas of study

The UWC Nature Reserve Unit provides an educational and recreational asset for the University of the Western Cape’s staff and students as well as surrounding communities by functioning as a base for ecological teaching, environmental education and research.

Our role is to develop an awareness and understanding by reconnecting students with nature, to inspire them to find a new appreciation for their natural surroundings, thus having an important bearing on future decision-making by the same individuals.

The role of this unit is to:

Management is geared towards maintaining the existing natural veld, by minimal disturbance and a continuous weeding programme. The weeding programme is aimed chiefly at preventing the establishment of woody aliens, notably Port Jackson.

All Acacia seedlings, as well as annual weeds and grasses are controlled either chemically or mechanically, depending on their density and where they occur. Regular checks are made to the area, especially in areas where accidental fires have occurred as fire promotes the germination of Acacia saligna seeds.

Sections of the reserve need to be burnt to clear the area of moribund vegetation. Areas have been identified and its viability examined due to burn restrictions, therefore a fire management plan is being placed in motion.

The Reserve is a core botanical site within the Cape Flats. Though first created as a refuge for Strandveld and Coastal Fynbos, it now functions as a base for ecological training, environmental education, research and aesthetic activities.

Given the current precarious conservation status of the Cape Flats, this reserve needs to be conserved as a unique nature reserve that affords visitors the opportunity to experience the original Cape Flats vegetation.

With its associated Environmental Education programme, the Reserve provides a much needed service to many schools and organisations. As learners grow up in a largely urbanised environment, often they become disconnected from their natural environment. Most schools in the Cape Peninsula, especially those situated on the Cape Flats, are often characterised as being under-resourced and troublesome.

Environmental Education and Outreach Greening is an attempt to reconnect them.

Photo Walks, Bird Walks and Faunal Surveys are part of the weekly and annual activities for staff, students and all interested to participate in, allowing a much needed break in nature to de-stress from a busy work/study environment. In turn, these activities help build the Reserve’s photographic library as well as updating species lists and with its central location, holds plenty of research and training potential for students.​
The concept of a nature reserve on the University of the Western Cape's campus originated in the early 1960s through the keen interest of a group of academics attached to the University. Through careful planning the idea reached realisation in 1977 with the official proclamation of the Cape Flats Nature Reserve under Section 12(4) of the Nature Conservation Ordinance of 1974. In 1978 the reserve became a National Monument, today known as a Provincial Heritage site.

Privately owned and managed by the University of the Western Cape, the reserve occupies 25% of the campus.

Although the reserve was first created as a refuge for Strandveld and Coastal Fynbos, it now functions as a base for ecological teaching, environmental education and research.

Endemic to the Western Cape and threatened by urbanisation, alien vegetation, sand mining and too frequent fires; a mere 49% remains of the endangered Cape Flats Dune Strandveld.

Conservation efforts are proving beneficial through rehabilitation and legislation where 6% was under formal protection and that has increased to 19%.

Once the most widespread vegetation type in Cape Town, but due to development, there is an irreversible loss and sadly only small patches of this ecosystem remain and even less protected.

Despite a national recovery target of 30%, the remaining percentage continues to drop and is currently at 14%.  Unfortunately, not all remaining vegetation falls within protected areas, leaving only 1% under formal protection.

Less than 10ha of Cape Flats Sand Fynbos remains within this reserve with visible evidence of disturbance.  Due to the small size of the reserve and its urban location, one of the biggest concerns to this ecosystem is that water tables can easily be altered and polluted as a result of surrounding urban areas.

This urban reserve with its central location holds lots of research and training potential for students and researchers. There are many short trails through the dunes, dune depressions, flats and past the seasonal wetland with a bird hide.

You can switch from one trail to the next at any of the intersection points or just relax at the picnic areas.

Groups can book guided tours through the endangered Cape Flats Dune Strandveld, critically endangered Cape Flats Sand Fynbos and seasonal wetland, or they can enter on their own or join the weekly PhotoWalk; which has already provided several species list additions.
The University of the Western Cape is the proud owner of the 34ha Cape Flats Nature Reserve.  Though first created as a refuge for Strandveld and Coastal Fynbos, it now functions as a base for ecological training, environmental education and research and serves as an excellent outdoor classroom for gaining an ecological understanding of the Cape's dwindling natural areas.

Cape Flats Nature Reserve is one of the most important floral conservation sites in the Cape Lowlands, since only small fragments are formally conserved.  The reserve consists of three major floristic regions: Vlei, Flats and Dunes with around 220 indigenous plants species recorded.  Other than plants, animals present in the reserve include caracal, grysbok and other small mammals like mongoose, various reptiles and over 100 bird species.

This urban reserve with its central location holds lots of research and training potential for students. As learners grow up in a largely urbanised environment, often they become disconnected from their natural environment.

Most schools in the Cape Peninsula, especially those situated on the Cape Flats, are often characterised as being under-resourced and challenged. Environmental Education is an attempt to reconnect them.

Tailor-made environmental education programmes comply with the school curriculum, with the focus on enjoying nature by working very closely with learners, students, educators and many other organisations.

Our aim is to develop an awareness and understanding of the inter-relationships between the natural, social, economic and political environment. We hope that by reconnecting students with nature, will inspire them to find a new appreciation for their natural surroundings, thus having an important bearing on future decision-making by the same individuals.

For more information or bookings, contact Laurenda van Breda - Lvanbreda@uwc.ac.za / 021 95 3274
Our main objectives are to: Support greening initiatives on and off campus by our students and surrounding community.
UWC’s Indigenous Nursery runs monthly Plant Sales which is open to the general public in order to generate interest in water-wise indigenous plants. The main objective is to interact with the community, educate, create awareness and to help green neighbourhoods.

Garden initiatives in communities has a positive influence on human behaviour and attitude towards nature. 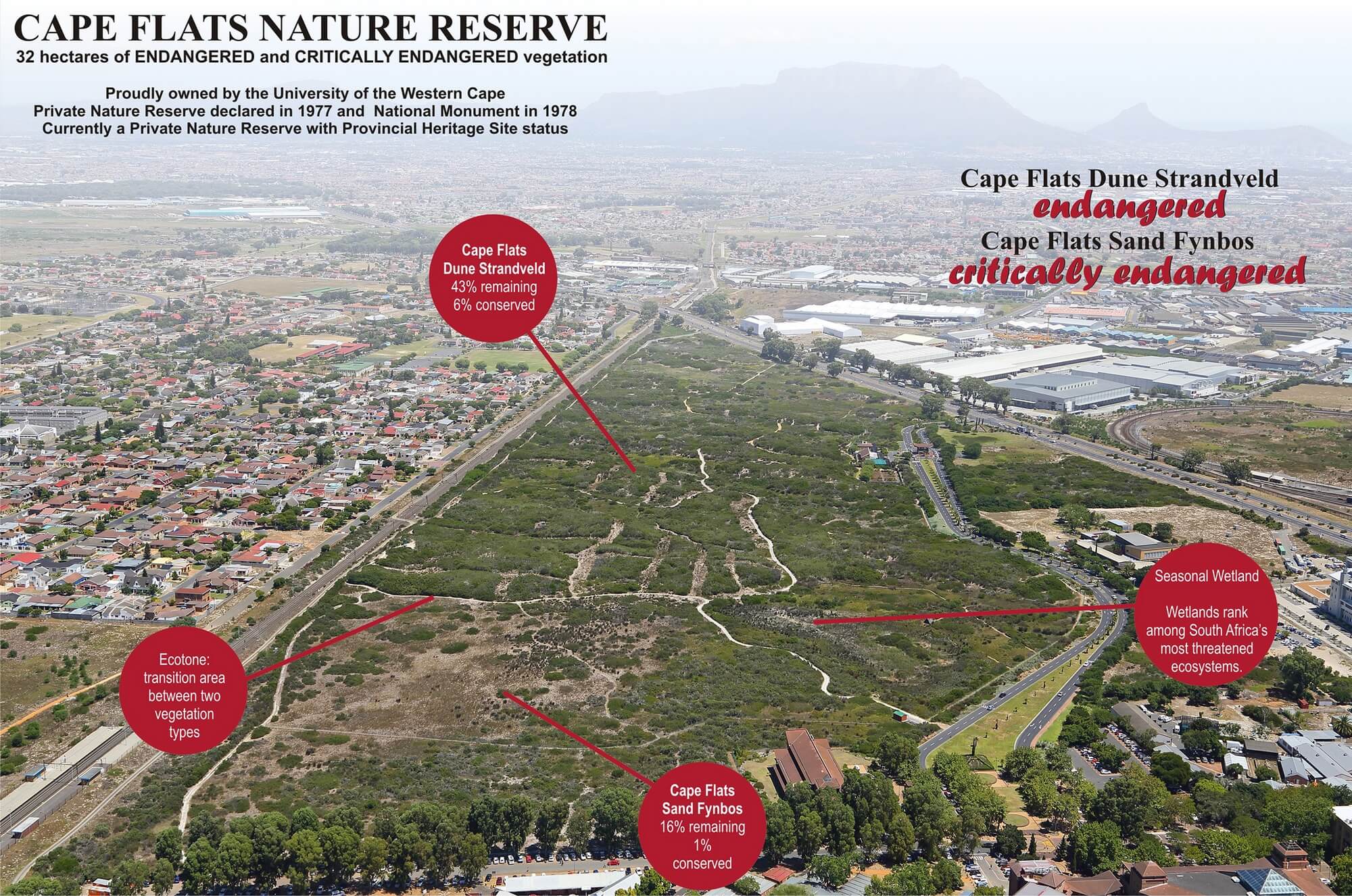 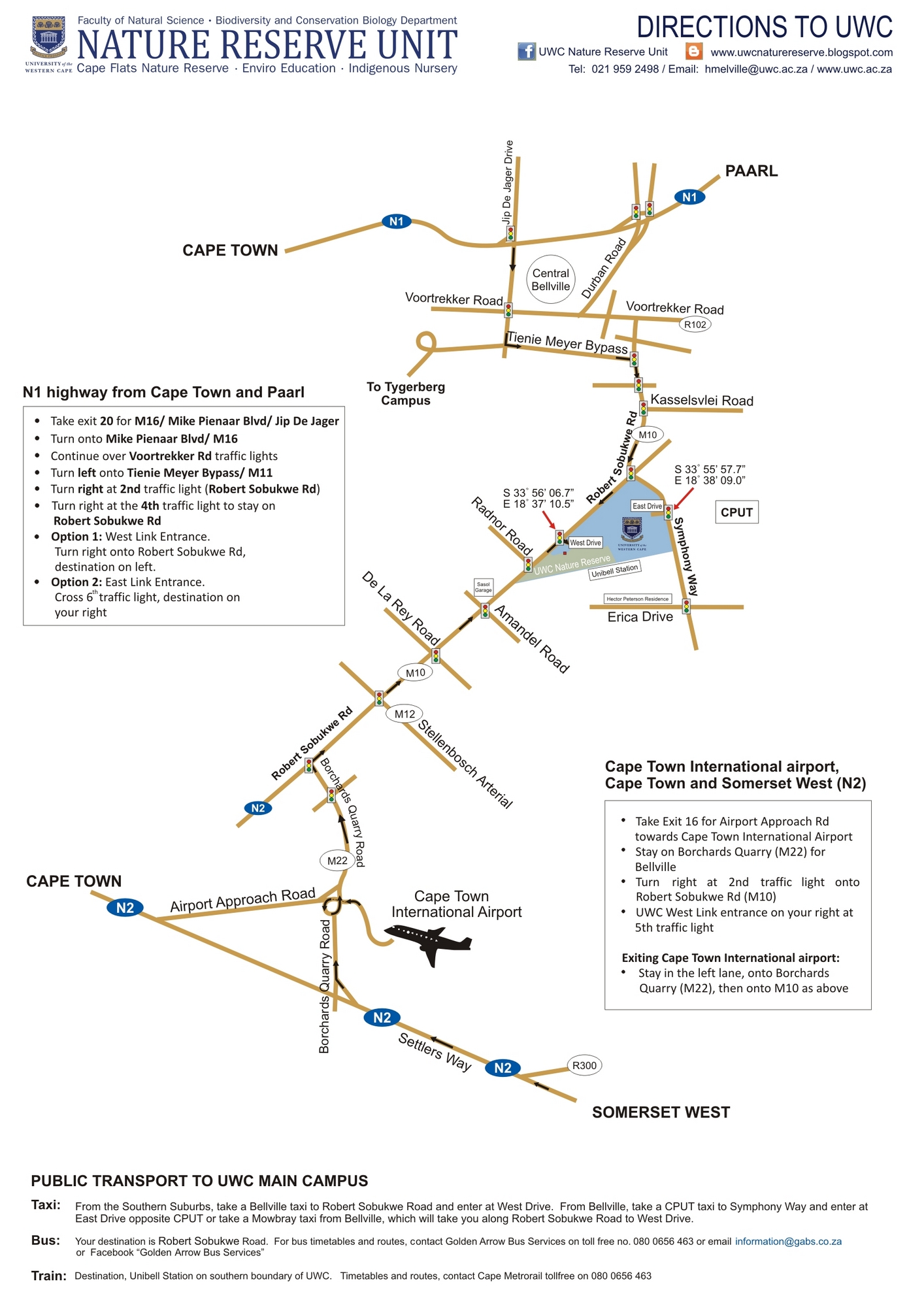 The 40 seater Environmental Education Centre is situated at the Cape Flats Nature Reserve next to the West Link security entrance (Robert Sobukwe Road) of the University of the Western Cape.

It is a cosy venue with a garden and undercover veranda area. The ideal place for environmental activities, meetings and workshops with parking for 15 vehicles.

The reserve has a picnic area, 170 metres from venue, which is easily accessible and often used for breakaways.