The Tokyo 2020 Olympic Games are only a few days away, but it’s still surreal for UWC alumna Kayla Richards that she will be part of the world’s biggest sporting spectacle, having been confirmed as a member of Team South Africa.

The 28-year-old will form part of the medical staff for South Africa, serving as a physiotherapist at the Olympics for the first time.

“My dream of going to the Olympic Games has been with me ever since I was lucky enough to be introduced to sports physiotherapy through UWC,” Richards said.

“It took a while for it to sink in and to realise that this is actually happening. Honestly, I didn't think it would take place when the Olympic Games were postponed last year due to the COVID-19 pandemic.

“It's an honour and a privilege to get to showcase your craft amongst the cream of the crop of athletes from around the globe. I can only grow and progress from this point onwards, as I’m not only representing my country, but also my family, my community, and many girls who are yet to achieve their dreams.”

Born and raised in Lotus River in Cape Town, Richards moved to Johannesburg after graduating from UWC with a BSc Physiotherapy in 2015. There, she opened her own mobile physiotherapy practice. 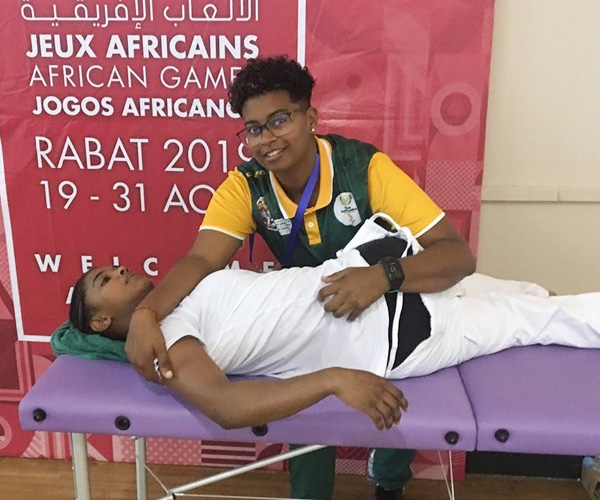 Richards played as centre-back for UWC's women's football team, aka UWC Ladies FC, from 2012 to 2015. She was part of a successful cohort that won the Coca-Cola Cup in 2013, were runners-up in the 2015 Varsity Women's Football competition, and won a bronze medal at the University Sport South Africa (USSA) Club Championships in 2014, after winning the Sasol League Western Cape in the same year.

“My passion for sports sparked my interest in being a physio. During my teen years at the national football academy, I always said I wanted to be that person running onto the field. Once I matriculated my journey started,” she recalled.

Four years later, after graduating from UWC, she opened her own mobile physiotherapy practice called ‘Physio on the MOVE’. The practice is based in Johannesburg, but Richards has a dream to expand it to other provinces.

Richards’s journey to the pinnacle of her profession in the South African Olympics team has not been easy. She started at the lowest level of local sport, and went on to provide her services to USSA and other universities.

“I started dreaming bigger and bolder, and now I’m seeing the fruits of those dreams,” she said.

“I have a task that I set out and need to do - one that I promised to the Lotus River people, to myself, and to my family... I will do whatever I can to accomplish it," she said.

With her Olympic dream now becoming a reality, Richards revealed that the call-up to be part of the South African team was emotional, and has vowed to give her utmost to South Africa and to support the team wherever possible.