Contact Us
< Back
Joseph Lumbahe is creating a star shower in the field of Artificial Intelligence (AI) technology in the ICT world as accolades seem to accumulate in his constellation. His recent nomination and shortlisting in a prestigious South African tech programme, followed shortly after by his win of a transcontinental tech award, prove Lumbahe’s star power.

First, the University of the Western Cape (UWC) alumnus and member of the Institute of IT Professionals South Africa (IITPSA) – South Africa’s IT regulatory board – got elected to IITPSA’s Scientific Committee in November 2021. Then he was nominated for the TransUnion Rising Star Awards in August this year. This gala event took place on 20 October in Sandton and Lumbahe placed among the top entrants in the country – out of nearly 1 000 entries – and was awarded a gold medal. Lumbahe says the Rising Star process had been challenging but “interesting”.

Nominees were put through their paces, and he says the final step in this gruelling process was to present an actual use-case scenario and the solution the nominees came up with, to the panel of judges – who then “bombarded” them with further questions. He calls this “a very comprehensive and thorough process!” and was placed in the Top 5.

“This nomination is an asset I will carry with me that will place me on the international map. It's been an interesting journey,” Lumbahe continues.

In 2021 Lumbahe also co-founded a digital transport platform that contributed to landing him another nomination in September – and the eventual win at the ceremony on 9 November – with the award bestowed on Lumbahe, this time in the continent-wide 2022 Africa Tech Rising Star Awards.

“I was selected among multiple entries open to all 54 countries of Africa to be recognised as an emerging talent in African technology on the continent, not just South Africa.” Nominees were listed publicly for public opinion and voting, and Lumbahe won the title.

“I am so happy. It would appear that I ended up catching the bigger fish!” he jokes. He now holds the title of Africa’s Rising Star. 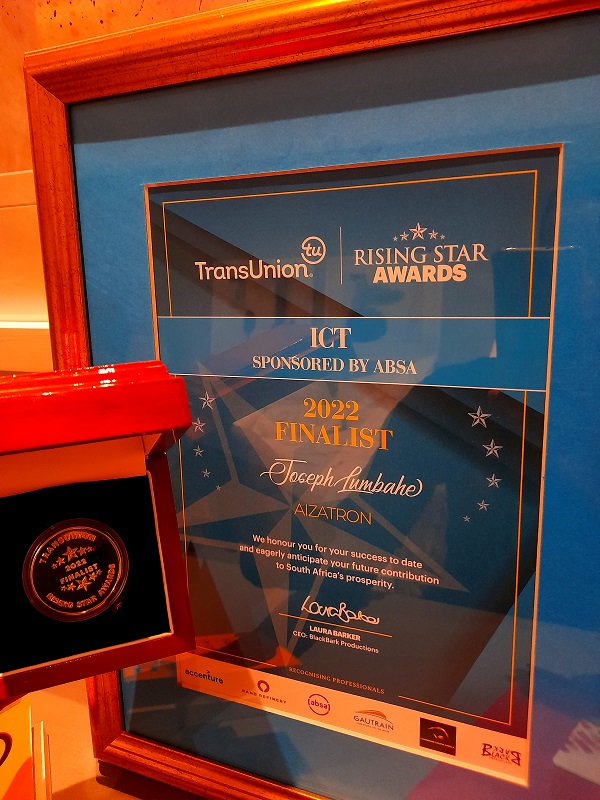 Lumbahe explains the project that contributed to the win. “I'm building a platform called Bus54 that digitises inter-bus travel to aggregate intercity transportation in Africa. It allows passengers to search, compare, book, and manage their journeys online, and transporters to manage their end-to-end operations without the need to worry about the tech.

“We are targeting the use of this application in all 54 countries in Africa, where about 90% of the population use road transportation.”

His venture has also been featured in Tech Cabal and the online publication of Venture Daily News.

Lumbahe, who completed an undergraduate degree in Computer Science and Information Systems from UWC, is the Manager and Lead Engineer for Computer Vision at Aizatron Group, and is contracted through Aizatron to MTN as a Fraud Detection Engineer. He is currently pursuing a second MSc in Computer Science from the University of East London in Britain.

He also holds several licences and certifications, and memberships to the professional associations The Institute of Electrical and Electronics Engineers (IEEE) and the Association for the Advancement of Artificial Intelligence (AAAI).