It was in 1990; we were young and passionate. Fired up by the national transformation agenda of the then South African National Students Congress (SANSCO – now SASCO), we were campaigning for changing campuses “From Ivory Towers to People’s Universities”. So, the SANSCO Media sub-committee decided to spearhead a campaign to transform the “music jukebox” UWC Radio (known as Radio Bush) into a campus community radio station.

Little did we know that we were writing the history of media diversity in South Africa.

I was studying towards a Bachelor of Science at the time, dealing with a curriculum far from my student, youth and media activism. But these extramural roles later shaped my work life – and helped me make my way through turbulent times.

I joined UWC Radio Society under John JJ Storom, narrowcasting in the Student Centre, to help transform UWC Radio Society into a Campus Community Radio station – and because many of us felt the music it played was not accommodating the University’s diverse cultures. I ended up being its Chairperson, led its affiliation to the South African Students Press Union (SASPU) where I later became an NEC member with Cde JP Louw (later, as SASPU Secretary General), and led its engagement with the then Cassette Education Trust (CASET) – an NGO led by the late Cde Edric Gorfinkel who trained us on producing radio programming, MHSRIP. 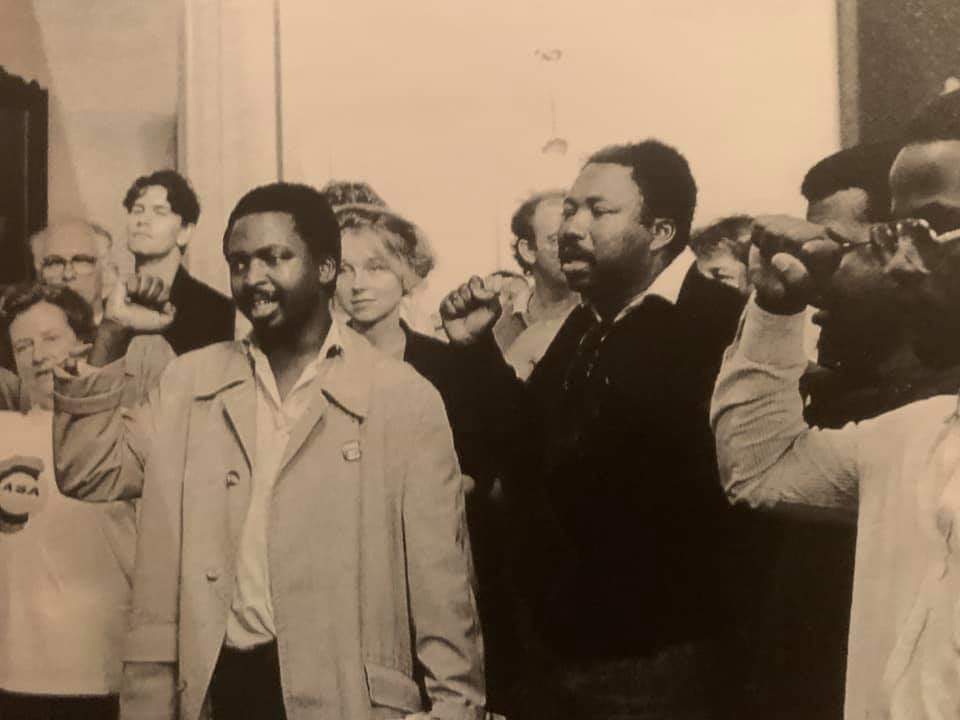 Lumko Mtimde and ANC Radio Freedom comrades in August 1991 in Amsterdam at Jabulani: Freedom of the Airwaves Conference

We still played music, but we also produced cassettes on struggle activities, the Defiance Campaign led by the Mass Democratic Movement (MDM) and the United Democratic Front (UDF). We played these cassettes on UWC Radio, distributed them in taxis and buses, and at rallies, as a way of providing progressive content to combat the propaganda broadcasted by the white minority regime-owned and controlled SABC.

So, with the support of UWC’s SRC, Executive Director of Student Affairs Comrade Saliem Mowzer, endorsed by the then Chancellor Archbishop Desmond Tutu, and the late, great Rector Prof Jakes Gerwel, we decided to turn UWC Radio into a community radio station based on campus.

UWC Radio operated as Radio Bush on air, a reference to our origins – the way we were seen as a “bush” campus by the Apartheid Government – and to our own understanding, we were so much more than that; but the word Bush remained after it was decided that the initiative be finally located at CASET in Saltriver and got named Bush Radio, the first SA community radio.

We had no choice. 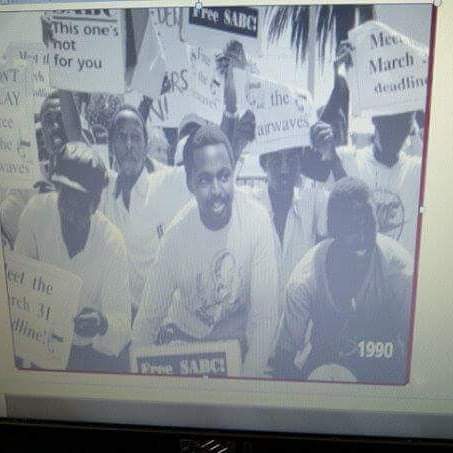 On 25 April 1993, we decided, as part of the Defiance Campaign, to pirate and broadcast “illegally”. Hours later, we were visited by the South African Police (SAP), who shut us down and confiscated our equipment. Two of our leaders, Cdes Edric Gorfinkel and Mervyn Swartz, were arrested. I was later arrested on my way back to campus at the Saltriver train station, taken to the Saltriver Police Station, and later released.

We focused on using broadcasting equipment to continue producing cassettes, while also training people on radio broadcasting skills and advocating for the establishment of community-owned and controlled radio stations countrywide. The training became the strength of Bush Radio, with trainers from the African National Congress (ANC) Radio Freedom like Cde Joe Mjwara, the late Cde Libby Lloyd and many other international experts like Cde Tracey Naughton, etc.

This workshop led to the launch of the National Community Radio Forum (NCRF) in December 1993 in Soweto; it led to inputs into amendments to the Transitional Executive Council’s (TEC) enacted Independent Broadcasting Authority (IBA) Act in October 1993 to clearly define community radio and add a one-year temporary broadcasting license to ensure the broadcasting playing field was levelled during the 1994 elections. The work of the Independent Media Commission (IMC), and later on IBA, occurred with input from Bush Radio, SASPU, etc. towards and after the reestablishment of the three-tier broadcasting industry in SA.

And amongst all this, UWC Radio presenters grew their broadcasting skills at Bush Radio. I was still a student at UWC, a SANSCO activist participating in the famous UWC HekToe protests. I remember most vividly being an ANC marshal at the release of President Nelson Mandela at Victor Vester Prison. We drove our campus combi and became part of the core of ANC Marshalls on this historic occasion.

I completed my degree in December 1993, graduated in March 1994, left UWC and resigned as Chairperson of Bush Radio. I bid farewell to Biochemistry and Physiology in pursuit of a communications, broadcasting and ICT future, and founded the NCRF as its first CEO. In 1995, we convened what we called the “Community Media 2000” conference, which led to the formation of the National Community Media Forum (NCMF), a body for community radio, community print and community television activists.

The amendments of the IBA Act led to the issuance of temporary community radio stations, and the licensing of community radio grew from 1998 into today’s more than 200 community stations licensed by ICASA.

And that is why Bush Radio is the mother of all community radio stations in SA. Not only because we were the first, we contributed into shaping the community broadcasting regulatory and funding framework, and also because almost all subsequent community radio initiatives received their training at Bush Radio, and because Bush Radio alumni went out to take our dream forward. 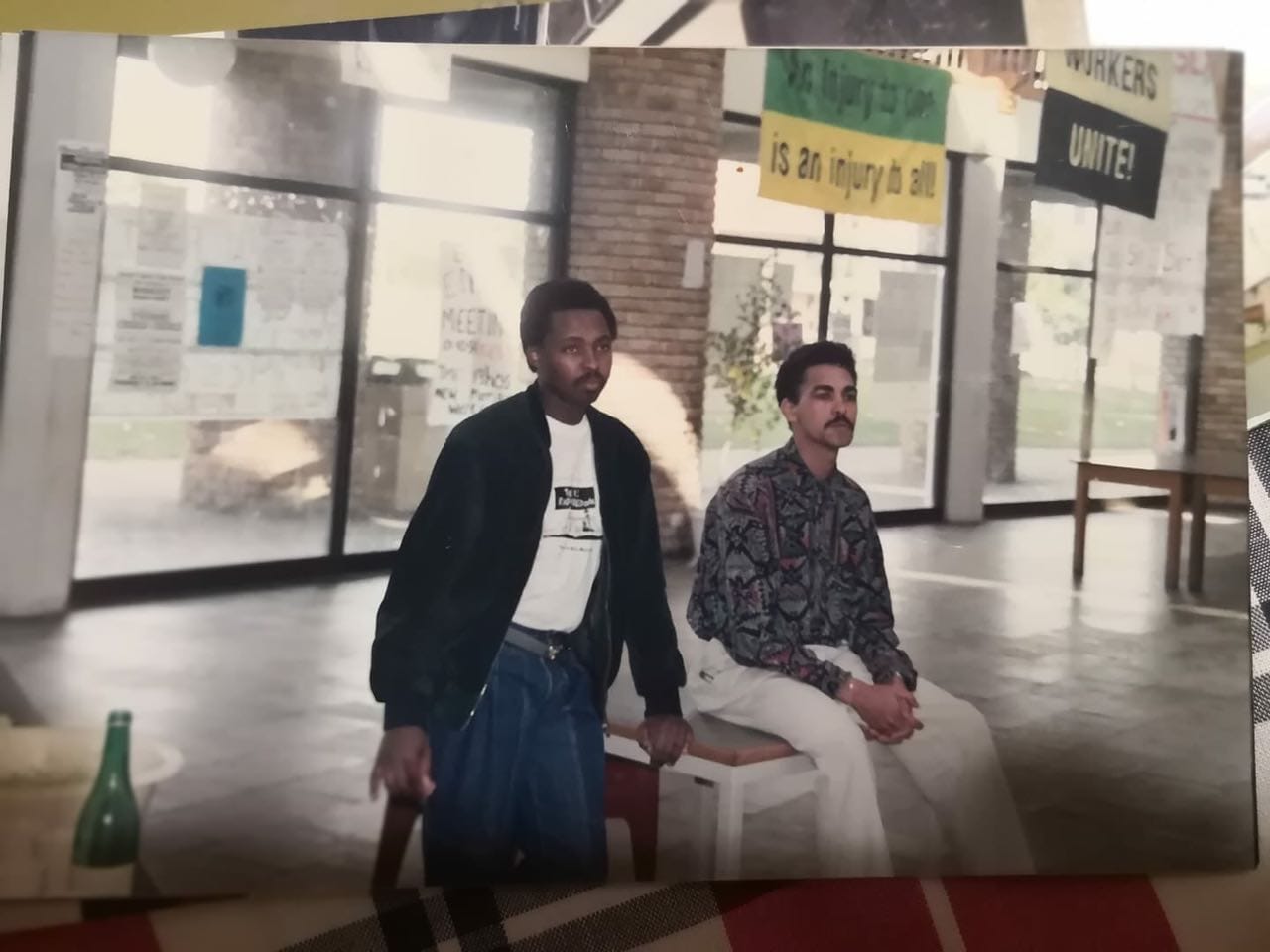 A Firm Foundation For A Bright Future

The University of the Western Cape had a big role to play in the new South Africa – helping to pen the new Constitution, providing leaders for the first truly democratic government, and producing new generations of students to change the world.

In all that, UWC Radio (which coexisted with the real community radio, Bush Radio) continued narrowcasting in the student centre, UWC Radio was retired in the early 2000s. However, it returned and formed the launch of the student-run UWC Media Society in 2019, and the launch of uDubs Radio.

And now, as we celebrate 60 years of UWC, we have seen new technologies leading to the digital economy becoming an inevitable future, digital media becoming a real and currently relevant platform,  digitisation and e-learning becoming a new reality for our education system.

These are exciting – and turbulent – times. And if there’s one thing the “Intellectual Home of the Left” knows, it’s how to make the most of those. So I have no doubt the University of the Western Cape will help lead us to greater heights in the next 60 years.

Lumko Mtimde is Special Advisor to the Minister in the Presidency, The Presidency, Republic of South Africa, a founding member (and first CEO) of the National Community Radio Forum (NCRF), President of the AMARC Africa and Vice-President of AMARC International. A former AZASO (SATISCO), SANSCO, SASPU and SASCO member, he’s a proud UWC alumnus (BSc Biochemistry and Physiology), and of UNISA (Postgraduate Diploma in ICT Policy and Regulation), Residence assistant, and founding Treasurer (and later Chairperson) of UWC’s Bush Radio – South Africa’s first community radio station. He was a long-serving Councillor of the IBA and ICASA, long-serving CEO of the MDDA, and served on a number of Boards, including SABC, SENTECH, NSFAS, ANDA, Ingwe TVET College Council, etc. He has served Government as a Chief of Staff (Minister of Agriculture, Forestry and Fisheries) and Chief Director responsible for broadcasting policy (Ministry of Communications).

Posted on
25 May 2020
Author
Lumko Mtimde, Special Advisor to the Minister in the Presidency