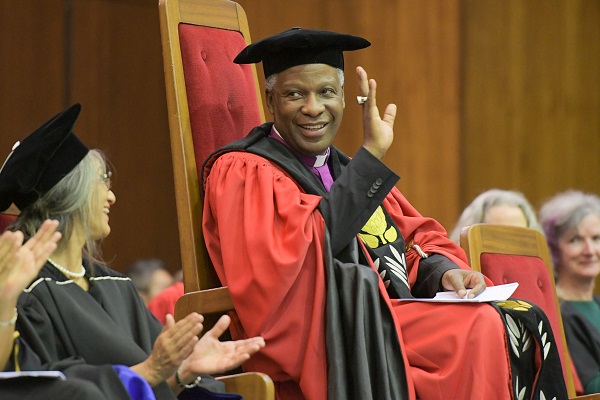 The Most Reverend Dr Thabo Cecil Makgoba, Anglican Archbishop of Cape Town, was born in 1960 and grew up in Alexandra Township, Johannesburg. He is married to Lungi Manona, and they have two children, Nyakallo and Paballo.

Central to his life has been his ordained ministry. Since completing training in 1989, he has had parish experience as curate at St Mary’s Cathedral, Johannesburg; Chaplain at Wits; Priest in Charge at St Alban’s, Ferreirastown; Priest in Charge/Rector and Archdeacon at Christ the King in Sophiatown. He became the Bishop Suffragan of Grahamstown in 2002 and was elected Bishop of Grahamstown in 2004.

In 2009 he received the degree of Doctor of Divinity, honoris causa, from the General Theological Seminary (of the Episcopal Church) in New York City. He described this as an award for all South Africans who were denied access to education. Later in 2009, he earned a PhD from the University of Cape Town, for a thesis on Spirituality in the South African Mining Workplace (published in 2012, ISBN 978-3-8454-7602-5).  He received the Ernest Oppenheimer Memorial Trust Scholarship to support this research.

He has been a panellist and discussion leader at various World Economic Forum meetings and topics on which he has made contributions have included:
He has established and serves on the boards of various NGOs. His other interests include reading theology, walking, and writing in leadership development. He published a short memoir, Connectedness, in 2005 and authored the book Faith & Courage – Praying with Mandela.

He frequently writes for a range of newspapers and journals, and many of these pieces, together with texts of sermons and speeches, can be found on the website of the Anglican Church of Southern Africa (www.anglicanchurchsa.org), and his blog (http://archbishop.anglicanchurchsa.org/).