Jaime Lee Peters is fairly new to the game of football and does not consider herself a talented player. But her hard work, dedication and commitment has made her one of the key players for the UWC Ladies FC.

Recently, the 21-year-old goalkeeper was named the Player of the Match after she saved three out of four penalties taken in the SAFA Cape Town Coca-Cola Cup final against Spurs Ladies Football Club, helping UWC win the trophy for the third time in five years [including 2013 and 2016].

“It was one of the best moments for me,” she recalls. “It was a special Coke Cup final victory compared to the one we won two years ago. This time around I felt like I had a bit of an impact. There was something of me in there and I had everything to celebrate for.”

About the penalty shootouts, the Kuils River-born Peters says her strategy was to remain calm, do what she often does in training, and imagine the penalty kicks as just another training session, “and I knew I would do good”

For the position, Peters has stiff competition, but on the day she was given the nod although she had played a league match the previous evening - something unusual as they are often rotated. “The evening before the final I posted on my social media that this is my time. And there were some shocked faces in the team when the coach announced my name in the starting eleven.”

Although she blames her “elementary error” for one of the two goals the team conceded, Peters believes she proved herself worthy to be selected. 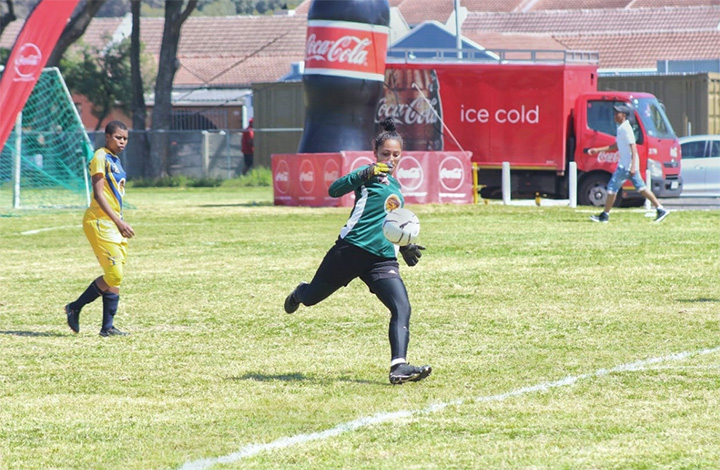 The BAdmin student only started playing football when she enrolled at UWC in 2016. At the time there were two other goalkeepers and she said she was the worst among them. “I was new in the game, could not play properly and had to deal with the feeling of being inferior. I had no passion or hunger, and those only started growing after our team took part in the national club championships.”

The following year UWC recruited another goalkeeper [Regirl Ngobeni], and Peters found it difficult to accept it. “Not saying I was supposed to be the first choice, because I lacked a lot of stuff football-wise. However, having played against top teams the year before I asked myself if I am not good enough? I always wanted to play every game, so having someone coming in to play was difficult to accept.

“I had to get rid of anger, hatred, jealousy and envy towards other people. Now I can accept anyone coming into the team with open arms and I’m at ease with who I am. I’m not the best and don’t consider myself as that, but I’m working hard to be the best version of myself. I realised if someone better than you comes to the team, she is here to help you. I will be there where you are through hard work and commitment.”

It was then that Peters started to show her abilities and capabilities on the football pitch. She believes that football has moulded her into the person she is today. “Had it not been for football, I would have probably dropped out of university. I chose football over a social life. I found ‘social life’ in football. It has moulded me to be this dedicated to my dreams and goals.”

Peters, who has obtained a 70% pass rate in her studies, is fine-tuning her goalkeeping process at the Farouk Abrahams Goalkeeper Academy, and has called on the University community to back UWC Ladies when they take on RV United in the Sasol League Western Cape play-offs on Saturday. The winner will represent the province in the SAFA National Women’s League – the first ever professional league for women football in South Africa, set to be inaugurated next year.

Coach Nathan Peskin said the success resulting from Peters’ perseverance, positivity and hard work in life has proved a valuable lesson to the community - that life is not about where or how you start but rather the way that you finish. “Not all of us are born with a silver spoon in our mouths, but hard work, determination and a positive attitude can get you anywhere.”