Contact Us
< Back
UWC have a golden opportunity to win their maiden Varsity Football women’s title when they take on Tuks at Tuks Stadium on Monday writes Charles Baloyi on varsitysportssa.com.

Everything is in their favour and the trophy is theirs to lose.

They have the most qualified coach in Thinasonke Mbuli, who has a Caf A licence, and the most feared players in the tournament in Molatelo Kobo, Amogelang Motau, Janice Smith and Tiffany Kortjie, to mention a few.

UWC have played in four of the last five finals and lost all four, which will serve as their biggest motivation on Monday. 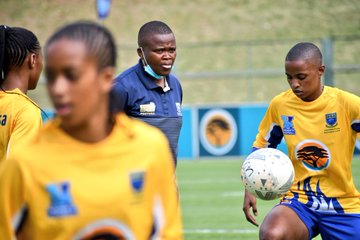 UWC won all three of their group games before thrashing Wits 4-0 in their semi-final, and have scored the most number of goals (12).

Mbuli (pictured left) is confident they will finally get the monkey off their backs.

‘We are one match away from ending our eight-year drought,’ he says. ‘The wait is almost over. We just have to stay calm and maintain our focus.

‘We can’t lose another cup final. We want to pop our champagne this time. We have players in this team who have lost two finals, and they told me they don’t want to go through that experience again,’ adds Mbuli, who was part of the UWC team that lost 4-1 to TUT on penalties in the last cup final in Mafikeng.

Tuks, meanwhile, won two and drew one of their group matches, before beating UJ 2-1 in the semi-finals.

‘The team that wants it the most will win it,’ she says. ‘I think it’s going to be 50-50. We are excited to play in the cup final and are ready for the big occasion.’

Tuks will pin their hopes of winning the final on striker Wendy Shongwe, who was named the FNB Player of the Match after their opening-round win against six-time champions TUT.

Monday’s final will kick off at 17:00 and be broadcast on SuperSport Variety 4 (DStv channel 209). ROAD TO THE FINAL