UWC Rugby had two objectives going into this year’s FNB Varsity Cup season: to finish mid-table in the final log standings and to obtain at least 20 points in the process.

The men in blue and gold did not only achieve their goals but did so in style, dishing out one of the most exciting brands of rugby in the competition and winning the hearts of many followers locally and internationally. As a result, three players have secured professional contracts, including Tinotenda Mavesere who was named the best forward of the 2021 Varsity Cup tournament.

“It was pleasing that we managed to achieve those goals,” UWC head coach Paul Treu, noted. “But, like I said to the players, it’s not what we have achieved this year but it is how we did it. I think the players really expressed themselves on the field, and I think it is the manner in which they conducted themselves and the exciting brand of rugby that we played that matters most. It warms my heart to know that we won so many hearts - so many rugby loving supporters in South Africa and internationally. Our name is out there as a team to be reckoned with.''

Among the games that were the highlights for UWC was the 60-19 thrashing of Central University of Technology when they beat the Bloemfontein side for the first time, and the thrilling Chester Williams Memorial Trophy clash which they narrowly lost 55-58 to UCT. Captain Pieter-Steyl Swanepoel said besides the trophy to remember the late UWC coach, it has always been a big motivation to play against the neighbouring universities. “It has always been a massive battle to play the neighbouring universities, a battle that we always want to come out on top in. In fact, in all games the team was motivated to show that we did not go to the tournament to make up the numbers. And we surprised a lot of teams”.

Finishing 6th in the 10-team Varsity Cup mini-league is music to the ears of the university community as it stands the rugby squad in good stead to achieve its overall goal of remaining in the tournament, with this year’s log being combined with the 2022 final log to determine the two teams that will be relegated to the FNB Varsity Shield the following year.

Last year UWC finished second last when the competition was called off due to the coronavirus-enforced lockdown, and finished at the bottom of the log in their maiden season a year before. But coach Treu credited all past players and coaches for their recent success. “It was lovely to be in a team that is a force to be reckoned with,” Swanepoel noted. “Just to finish like this after we struggled in the past, just to know that we have improved from the last years, is a high moment for us”. 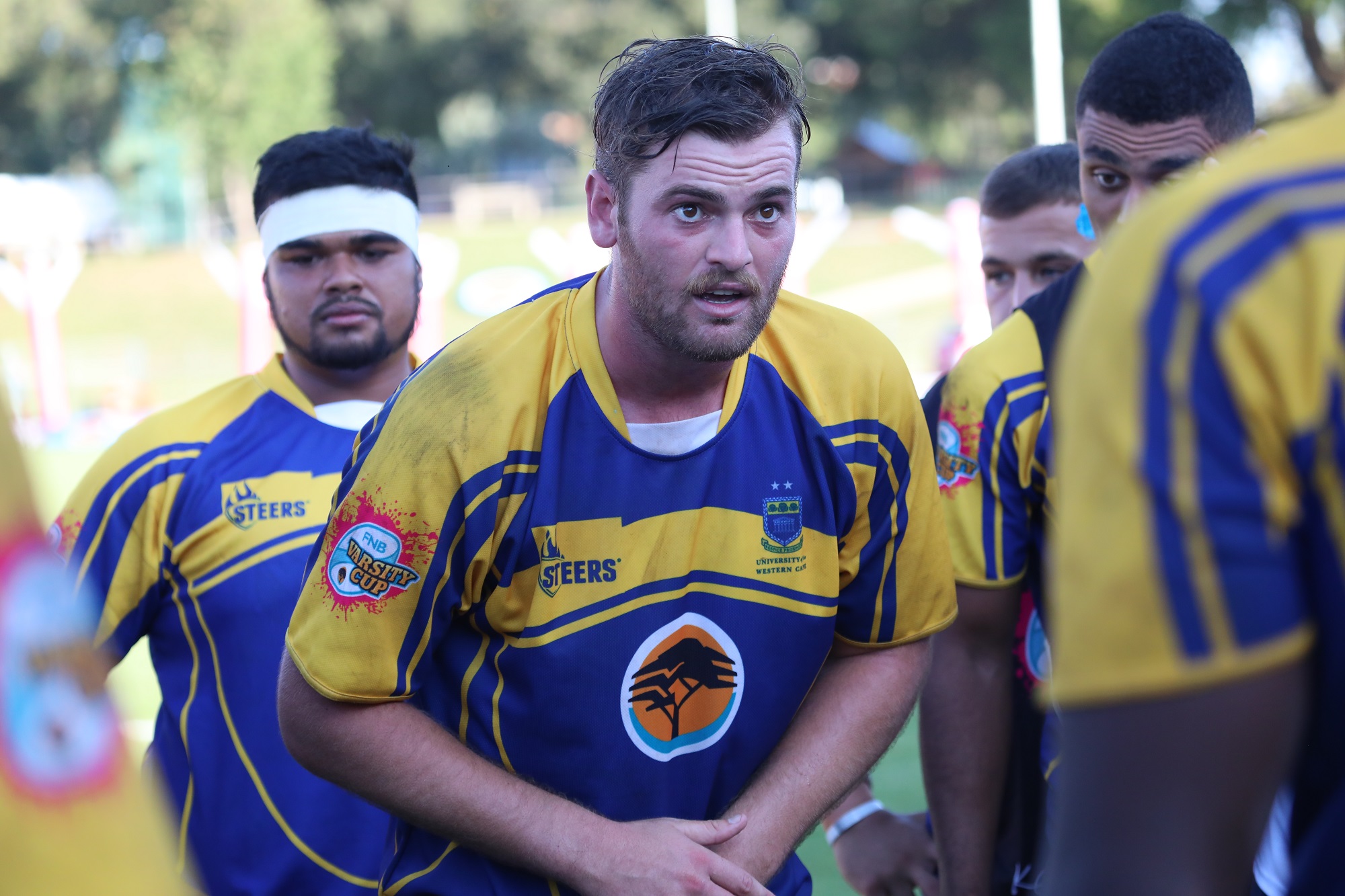 What worked for the team this season?

Knowing that relegation and promotion would be decided over the two seasons, Treu and his coaching staff devised their strategy accordingly. “What was important for us was results. We wanted to win as many games as possible, but also give exposure to as many young players as possible. So when we went to the first 'bubble' we picked our strongest team. In the middle bubble we decided to give all the players an opportunity to experience the Varsity Cup to get some miles behind them, because this is not a sprint, it’s a marathon. It is not only about this year it is about next year as well.”

“When you see some of the results, obviously we lost some of those games, but these youngsters really stepped up to the plate. And they played so well that we almost could have beaten those teams. In the last bubble we picked the best teams for the first two games which is why we could get good results. We wanted the results but also, in the long term, wanted to give experience and exposure to more youngsters.”

This strategy will likely help the team going forward as some of the senior players are in their final year of studies. “The minutes that these youngsters played this year will hopefully stand us in good stead next year,” the former Springbok Sevens mentor stated. “Next year we will be losing our entire front row who are all finishing their studies. We will try to convince some of these players to do a postgraduate programme. But at the same time, there are also quite a few exciting new players, such as the Western Province duo of Lukhanyo Vokozela and Lamlu Nunu, who are coming [both are part of the SA Rugby Academy 2021 programme]. And we are very excited to see that kind of quality coming to UWC.” Treu revealed that when he was appointed last year, one of the first things to challenge was UWC being viewed as a fallback, not a first choice. “The only way to change that is by the way we play and the kind of rugby we dish out for the fans. UWC is now different to what it was seen to be before, and every coach and every player that came through the system contributed to our improved success this season”.

With the Varsity Cup out of the way and having pulled out of the Western Province Super League A club competition this year, the only tournament that the UWC rugby team is still expected to take part in is the USSA week which is scheduled for August (also in a bio-secure bubble).

The team is also pulling all resources together to ensure that players do well academically in order to obtain enough credits to make the team next year. Tutors were organised timeously to assist players and Treu said the team is grateful for that kind of support. “We are happy that our tutors are helping our players to focus on their studies and hopefully they will make the required grades this year. Our academic support has been tremendous, especially in the bubble. It is studies first and rugby second. That has been our motto.”

Swanepoel added that everything was in the right place this year, and that made a lot of difference. “Now the talk in the team is about having enough credits to make the cut next year. You need to be sure that your academic credits are in place, otherwise you are just a normal student and you miss out on a once a year opportunity like Varsity Cup”.

Going forward, there is a saying in the team: “Keep on climbing the mountain,” Treu concluded. “This was a great campaign and a great start and we are looking forward to the new season. Everybody, from our director Mandla Gagayi, the Rector and the management team, the sports science department and the rest of the university community has come to the party as it relates to our performances on the field. If it were not for the support from the university I don’t think we would have been able to give the performance we did over the past two months. I hope we can continue with that kind of support and we will do our best to retain most of our players and continue to attract quality players to the university, making sure that we can be successful and stay in the Varsity Cup.”