Thursday, 14 June 2018 - The University of the Western Cape urges staff and students to ignore all hoax messages regarding storm and hurricane warnings.

Cape Town’s disaster risk management spokesperson, Charlotte Powell, said they have been inundated with calls as a result of the fake alert.
“The hoax message refers to hurricane winds and quotes the city’s disaster operation number. We appeal to the public to disregard this message and refrain from calling the operations centre,” said Powell. 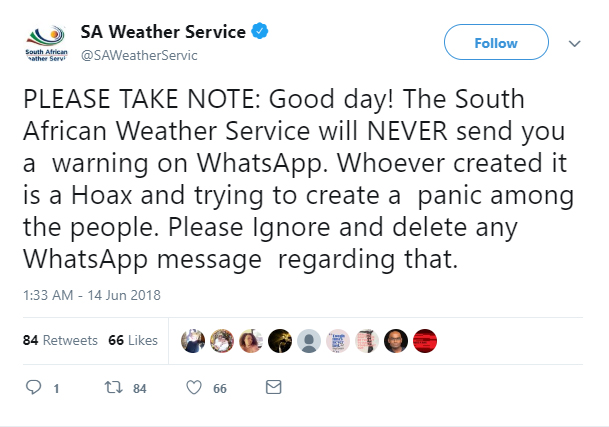 According to the weather service, “wet and cold weather” is expected in the Western Cape on Thursday and Friday.

“Cold temperatures are expected for the western parts of the Northern and Western Cape on Thursday. Further cooling is expected on Friday over the entire Western and Northern Cape Provinces, where very cold conditions (approximately 10°C and lower) may be expected over the southern interior of the Namakwa District and northern parts of the Cape Winelands,” the weather service indicated in a report.