Nuclear physicist Cebo Ngwetsheni is leading the way into the investigation of the very core of matter, as the first author of a groundbreaking paper on nuclear polarization, just published in Physics Letters - the same journal in which the Nobel-deciding discovery of the Higgs boson - also known as the "God particle" - was published by CERN. This is just the beginning of an epic trip toward Ithaca.

Ngwetsheni has just started his PhD at the University of the Western Cape, where he began his scientific journey as an undergraduate.

“Cebo has achieved a beautiful piece of physics that is far out of the box,” says Professor Nico Orce, Ngwetsheni’s thesis supervisor and co-author of the paper. “Among other breakthroughs, our work reveals a new spectroscopic probe to search for magic numbers at high-excitation energies. It’s exciting in what it means for science - and even more exciting in what it means for UWC, as the only solely UWC-published paper we’ve had in this prestigious journal.”

As Prof Orce explains: “The composition of matter and the abundance of elements produced in nuclear reactions which have taken place a long time ago in the stars or in star explosions, strongly depends on nuclear shell effects. In a similar way to onion shells, proton and neutrons are distributed in the nucleus in a very particular way according to the laws of quantum mechanics.

“Nuclei that are specially stable are known to have a particular number of proton or neutrons called magic numbers,” Orce notes. “This new work permits us, for the first time, to investigate magic numbers at high excitation energies in the nucleus.”

The paper was published as Cebo graduated with his Master’s in Nuclear Physics - finishing his thesis, Polarizability effects due to the low-energy enhancement of the gamma-strength function. Adding icing to the cake, it was published on his birthday!

The firstborn of three, Ngwetsheni hails from Queenstown in the Eastern Cape, where he lived until he finished high school. He had always wanted to be either a scientist or an engineer - something that would allow him to do research, and also to work with cutting-edge technology.

“It was a tough decision for me but ultimately I was more interested in the fundamentals of physics, and I came to UWC to pursue it,” he says. “And then in third year, I started developing a real passion for nuclear physics: getting to research deeper into the core of matter was quite interesting, and I found I understood it better than other subjects - and wanted to understand it even better.”

Beyond being a research scientist and a lecturer (he already lectures part-time in radiography at the Central Peninsula University of Technology), Cebo also maintains a huge interest in farming. He has partnered with cousins and friends in his home village to manage sheep, pigs and crops, and he’s thoroughly enjoying it.

“I’m not really interested in the corporate world, but I do like the idea of running a successful business,” he says. ”Farming is something I grew up with, thanks to my grandparents, and it’s actually very interesting - getting it right requires a lot of thought and constant learning, and that’s something I’m passionate about.” 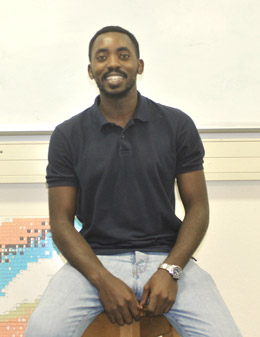 A Taste Of Knowledge: Sharing Is Caring

For Ngwetsheni, his success isn’t just about his own career - it’s also about helping others see further.

“I want to have an impact when it comes to development of technology and knowledge and to set an example for people from the communities - to help them see that there’s so much they can do, so much they can be,” he says. “My dream is to contribute to the ultimate quest for understanding the natural world - and to inspire others to see that they can do it, too.”

That dream of being an inspiration is shared by Prof Orce, who has helped students conduct research all over the world - and helped run one of the first major African-led experiments at CERN, using some of the most powerful scientific equipment in existence to examine sub-atomic matter and reflect on what happens when stars explode.

“Nuclear physics is a field that’s crucial to fulfilling South Africa’s economic ambitions, and to discovering more about the basic building blocks of our world,” says Prof Orce. “One of the Physics and Astronomy Department’s highest priorities is to attract and enthuse South African students from disadvantaged backgrounds, and bring them up. Cebo is one beautiful example!”