Chester Williams understands the call of history. He was in the midst of an epoch-making moment as a member of the Springboks’ 1995 World Cup-winning squad that inspired a nation. Now, as the head coach of UWC’s rugby side, Williams can hear the call again: history beckons.

Life and circumstance, somehow or other, often place certain individuals at the forefront of an era’s critical moments. After his heroics as a player in 1995, when he was the face of a changing country, fate has now conspired to thrust Williams-the-coach into yet another significant, defining moment.

UWC, drenched in a history so pivotal to the struggle against oppression and discrimination, makes its debut in the top-level Varsity Cup rugby tournament this year.

It is a momentous occasion for the University and its students, for Williams and his coaching staff and, above all, for the storied past so integral to UWC as an institution.

There has always been a strong rugby culture at UWC, despite it trailing behind traditional strongholds like Stellenbosch University, the University of Cape Town (UCT) and the University of Pretoria with regard to facilities and a historical pipeline of attracting the best rugby talent. 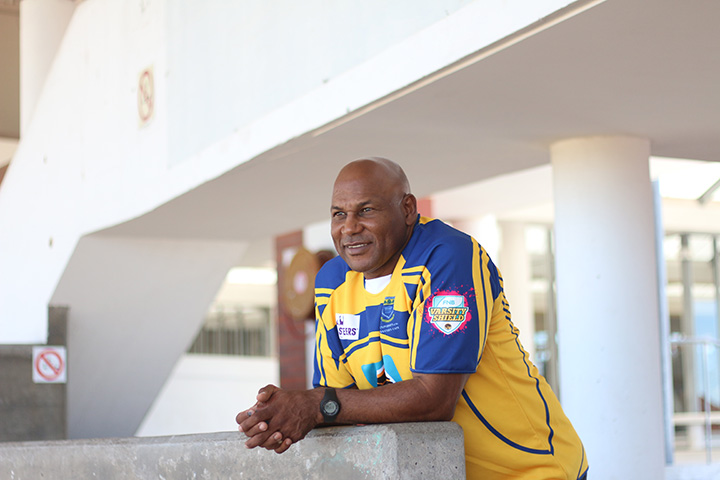 Now, after dominating the lower-tier Varsity Shield and sealing promotion to the Varsity Cup with consummate ease, UWC has an opportunity for exposure - to reveal its potential as a sought-after academic university and, significantly, to add “rugby destination” to its prospectus.

The Springboks’ 1995 triumph, in which Williams was so influential, was captured on screen in the movie Invictus. The title refers to a poem by William Ernest Henley, which speaks, in a particularly moving manner, about courage and dignity in the face of adversity, and of the indomitable spirit residing deep within us all. In the movie, former South African president Nelson Mandela, played by Morgan Freeman, recites a few lines from the poem: “I am the master of my fate; I am the captain of my soul.”

In the same way, as Williams and his Springbok teammates grabbed their destiny by laying their bodies on the line for an entire country in 1995, accepting that the moment was bigger than themselves, so too will Williams and his UWC squad be ready to accept this moment as the culmination of so much that has gone before. They stand at the precipice of history, fully aware that this, too, is bigger than just rugby.

Williams, now armed with the emotional experience of 1995, certainly understands the moment. “In 1995, we were doing it not just for SA but for the entire world,” says Williams. “Everyone wanted us to change, to see us become integrated as a nation. Still, now, I do guest-speaking about the 1995 World Cup success, and I am still stopped at malls and other public places where people speak to me about it and ask for photos. It was an amazing time for us as a nation.

“This time, with UWC, it’s different but also the same in that we are the only previously disadvantaged university in the Varsity Cup. For UWC, this moment is as big as in 1995. It creates an opportunity for this university to get much-needed exposure and, at the same time, to showcase its rugby talent.”

As Williams has played at the highest level of the sport, he is fully aware of the challenges his team will face. He is not naïve; he knows it will be difficult. However, he has called on his players to be the masters of their own fate – their future doesn’t have to be determined by others; they are in a position to shape their own destiny.

William’s aura and charisma have animated this particular squad and, as preparations continue for the University’s big moment, he will continue to be the captain of their souls – a guiding, galvanising and inspirational presence.

“So when I arrived, the first thing was to instil discipline – players were coming to training when they wanted to and I needed to change that. I had to get the players to trust and respect each other. That was the first task. Then, once the players were used to my way, when they knew how I wanted to do things, I was able to be sterner and get us going.

“In the Varsity Shield success, the camaraderie of the UWC squad was evident and we went on to win the competition and, of course, seal promotion to the Varsity Cup. We won every game (last season) and gave away about five tries throughout.

“The Varsity Cup will be a different story. There are other principles and aspects I will have to focus on, especially the technical and tactical side of the game. It will be our first year in the competition and, for us, it’s a case of make or break. Essentially, though, we want to show that we rightfully deserve our place in the event.

“Looking at the schedule of games, we will be targeting a few teams. Our focus is to make sure we win at least three or four games. After that, we will have something to build on for the following year and can grow the team in that way. 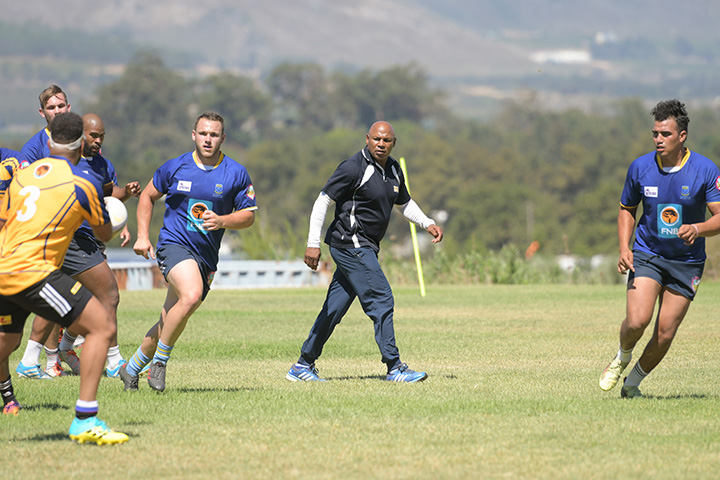 “It will be new to the players: Monday night rugby, a full stadium, and it’s on television... They are not used to it, but we are arranging some high-profile friendlies – against WP, for example – to expose them to rugby at a higher level and under pressure to see how they respond.”

Every coach, in any sport, has their own particular style, a firm grasp of how he wants his team to play. Williams is no different. Asked about the Varsity Cup, the former Springbok wing reveals just a smidgen of what to expect from UWC in the competition – and, just as importantly, uses the opportunity to emphasise his commitment to academic performance.

“Obviously, I love players to have the ball in hand but I also want them to understand when and when not to do things,” he says. “Looking at the Varsity Cup, we will do our analysis and will have an approach for each and every opponent. It’s not just a case of playing expansive rugby. Rather, it’s about balance and allowing players to do things that come naturally.

“What is very important to me as a rugby coach is that players pass their grades. Talent is obviously important, but I’m just as committed that students work hard academically. There has to be a balance between rugby and studies to be a player at UWC; it has to be handled properly.”

Williams, needless to say, remains as passionate as ever about the Springboks – and, looking at the current squad, is optimistic about the future.

“Under Rassie (Erasmus, Springbok coach), our rugby is looking better,” he says. “I think, with Rassie as a coach, the players understand their roles better and there is more consistency in selection. Results-wise, it’s about the same as when Allister (Coetzee) was the coach, but there has been an improvement in the style of play, and Rassie is dealing very well with the players too.

“I’m very confident that the Springboks will be among the contenders for the World Cup.”

As for his own future, he admits that some time or other, he will have to leave UWC behind. It will be sad, but such is the reality of life and sport. Williams is 48 years old and, like anyone else, has ambitions.

“I would love to be a professional coach, to be able to coach at a higher level,” he laments. “For me, UWC provides the perfect platform to get to the next level. I am very happy at UWC and I feel that I don’t want to leave here – but I know the day will come when I will have to. When that does happen, I know UWC will have been the stepping stone.”

So, as UWC prepare for their Varsity Cup debut, as the seminal moment draws near, as the call of history increases from a chime to a cacophony, Williams wants to send a personal word to each and every UWC student.

“My message to UWC students as we get ready to play in the Varsity Cup is that we need their support. The players have worked very hard – not just with rugby training but in their studies too – and they are now going to put their bodies on the line for this university.

“I want to urge UWC students to come out and support and encourage the team; I want them to come to every single home game and show their love and support for the team, and to show UWC’s way of playing sport.” 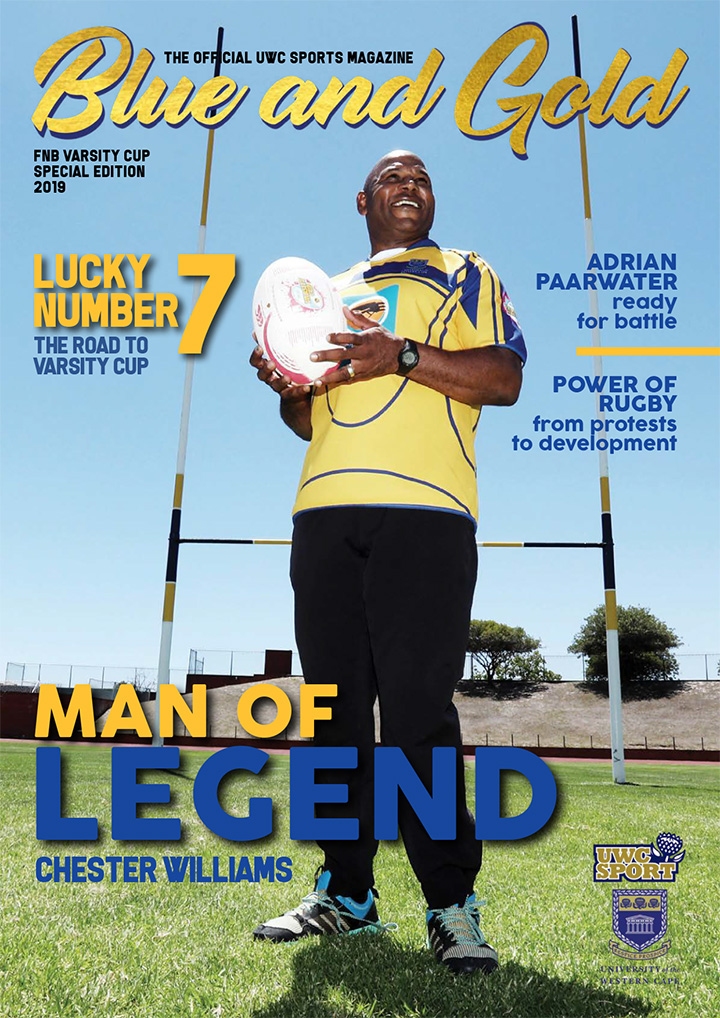 This article was first published in the February 2019 Varsity Cup special edition of the Blue and Gold - UWC Sports’ official magazine. Read the full magazine here.