Celebrated Umkhonto we Sizwe activist, academic and University of the Western Cape (UWC) alumnus Cecyl Esau died of natural causes at his home on 17 March 2021 – but he leaves behind a legacy of commitment to justice that is written in stone.

“Cecyl Esau arrived at the University of the Western Cape in 1975 – and since then, his spirit has never left,” said Professor Tyrone Pretorius, UWC Rector and Vice-Chancellor. “As an activist, a struggle stalwart and a renowned scholar, he embodies the best of what UWC hopes to be – a metaphor for the South African spirit, for overcoming adversity and helping others to do the same.” Born in Worcester on 30 September 1955, the youngest of four children, Afrikaans-speaking Esau was the only one of his siblings to attend UWC. Even before he arrived at the University, his determination to fight apartheid had been awakened by the activism of his father and through meeting ANC cadres Hennie Ferus and Johnny Issel.

From the moment he arrived as a BA (Law) student at UWC in 1975, Esau immersed himself in political activism on campus. “During the national student uprising in 1976, I became aware that the students from the oppressed community, being more critical, had an important role to play in making other layers of our society more aware of the injustices in our land and the need to transform our society into one free from apartheid and exploitation.” Cecyl Esau (seated bottom left) with an expression of amazement at what was happening. Nazeem Lowe is seated next to Esau (bottom right). Sazi Veldtman gives a clenched fist salute on the right side of the picture. Nazeem is lovingly touched by his mother, Fowzia Lowe. The woman behind Esau is Rabia Samuels, an activist from Worcester. Image Credit: Benny Gool.

Despite expulsion in 1977 (for a year) and lengthy spells in detention that scuppered his LLB studies, Esau recruited many students to the ANC until he was imprisoned in 1986. He was sentenced to 12 years imprisonment on Robben Island.

“My comrades and I did not have any illusions that the road we embarked upon was an easy one,” he noted. “However, there is no middle road between racist oppression and exploitation and resistance and struggle. We believed firmly that 'the armed struggle was the continuation of the political struggle by other means.”

Released in 1991, Esau promptly went to work for the ANC, and ultimately the Institute for Justice and Reconciliation, while furthering his studies at UWC (BA Honours in Development Studies, 1993; MA, 2007). He was awarded the Freedom of Worcester accolade in 2020, recognising his significant contribution to the rights to freedom and justice.

“Cecyl helped the University find its place in the great struggle for freedom and justice,” Prof Pretorius said. “But he also helped us find our soul – to define who we were, what we wanted to be, what we stood for. And he set a truly inspirational example, demonstrating great courage and conviction by always standing up for what he believed in while respecting the rights of others to do the same.”

Learn more about Esau’s legacy through this video “Memories of a Political Prisoner” from the IJR.

A Legend, A Legacy: The Work Continues

Cecyl Esau will be remembered for his role as a political activist, a distinguished educator and historian, and a man who devoted his life tirelessly to a larger cause.

In a flurry of social media posts, Esau has been described as a “true stalwart and a great leader”, a “revolutionary to the core” and a “giant of a person” who always remained humble.

Cleric and former apartheid activist Allan Boesak described Esau as: “That rarest of beings: a gentle revolutionary. A fiercely committed activist, one who understood the demands of the revolution with unremitting clarity, and therefore understood what was expected of him. Yet a man who was not so blindly loyal to the Cause that he lost sight of the people: their needs, their fears, their joys, their aspirations, their dreams and their hopes. His passion for freedom and justice never eclipsed his pathos for the people. That is why he was so loved and respected. And that is why he will be honoured and remembered.” 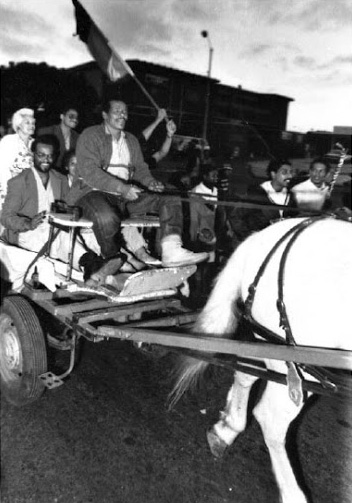 Benny Gool took this photograph on the 21 February 1991 on the day of Cecyl Esau's release from Robben Island. It was taken after Esau and others were processed at Cowley House. They were driven by horse cart along Bonteheuwel Ring Road on the Cape Flats. Seated behind Esau (captured front left) on the white horse-drawn cart is Mrs Michels and next to her is Quentin Michels. Partially obscured behind the driver, whose name is Hadji Armien Abdol, is Quentin's eldest sister, Pauline English. Image Credit: Benny Gool.

Former UWC council member, alumnus, and community activist Dr Llewellyn MacMaster said he would remember Esau as a principled and committed comrade. “He was an excellent mentor to younger persons and committed to sharing ideas with others. Cecyl loved to work behind the scenes and at grassroots level, and dedicated himself to listening and recording the stories of so-called ordinary people and marginalised communities. Self-glorification, self-enrichment and self-promotion were not part of his vocabulary and value-system.”

In 1987, the old UWC male and female hostels (built in the 1960s and 1970s) were renamed Cassinga and Cecil Esau – names retained to this day. When Esau – who was in prison at the time – heard that the men’s residence had been named after him, he said it was an “acknowledgement of the role played by the students of my generation in contributing to freeing our country from apartheid".

He was kind enough to excuse the misspelling, because to him, it wasn’t about his name or his achievements – it was about honouring the work done to achieve a freer, fairer society.

As Cameron Dugmore, provincial leader of the ANC, noted: “Comrade Cecyl was the first head of organising for the ANC in the province after the unbanning. I served on the campaigns committee which fell under his department. He was very meticulous in how he planned and implemented and had the ability to infuse political education into the work we were doing. At the end of meetings, he would often make the call – “Daar is ‘n volk om te lei en ‘n land te bevry! Daar’s werk!”

The University of the Western Cape mourns the passing of this great man and extends its sincere condolences to his family and friends during this time.

Said Prof Pretorius: “Rest well, Cecyl. We will carry on your work – and remember your name”.