David Koloane’s work must surely be considered as one of the rare treasures to make it into the archive of what Roland Barthes once called “a lover’s discourse”. It consists of fragments of philosophising and artmaking, of art education from a lover’s point of view.

In echoing Barthes, we might say that Koloane’s work compels one to understand how anguish that is not of one’s own making can be turned into an amorous pursuit, a life-affirming poetic of black life burdened by a modernity framed by the catastrophic history of slavery and the uncanny returns of race that gripped the world into which Koloane was born.

In other words, you will discover in the vast selection of the works on display not merely a retrospective, but an itinerary of thought that reveals how those like Koloane held on to the promise of love when the spectre of racism cast a spell aimed at a blunting of the emotions.

Koloane set out to discover the crisp edges of life at a time when apartheid was transforming the urban subject into machine-men and machine-women. Not to put too fine a point on it, I am saying that apartheid was a programme aimed at the blunting of emotions in which the black subject was transformed from rural subject to urban worker. This industrialisation of black subjectivity – that functioned as the very condition for the instrumentalisation of memory that is our burden in the present – extended beyond the crass conditions of a brutal system of exploitation. It enveloped the very core of a subject caught in the nexus of modern noise and an assault on the senses.

Koloane would have none of it. His is a life’s mosaic that refused to be interpellated by the power of a racialised state, a look in the other direction, to what the Irish poet Seamus Heaney calls “the far side of revenge”.

So, how does Koloane enter the archive as an exponent of a lover’s discourse? Much has been said about the way his work helps to mediate the experience of the everyday. My own recollection of first encountering images of work by Koloane in the pages of Staffrider takes me back to a lecture by Jakes Gerwel at the University of the Western Cape in 1986. Jakes, as he was fondly known, undertook the unenviable task of trying to educate a generation of politically charged students, like me, through an aesthetic training of the senses. Jakes was always keen to get us to work on ourselves as interior beings before we rushed off to overturn the system.

I faintly recall my first impressions of Koloane’s images where life bustles with activity, where human and machine jostle for space on the canvas and where subjects escape apartheid by yearning for desire in the crevices of cityscapes that pulsate with sounds and signs. So powerful is the sentiment, that when I first read Peter Abraham’s novel Mine Boy in a first-year class at UWC, each page appeared animated by a sensibility that I could have sworn derived from Koloane’s art. With the entry of Koloane’s art in my mind’s eye, the world would never appear the same again. Amidst the modern noise, I discovered the artist’s quiet contemplation.

In the 1980s, at the height of the State of Emergency, artists provided an education that had otherwise been foreclosed by the system of Bantu Education. In an environment drenched in violence and rapidly draining of desire, the artists who exited the shadows of the studio to encounter the everyday provided an education to see through the banality of apartheid. This is not unlike Freud’s reading of the everyday which he encounters after stepping out of his consulting rooms into the streets of Vienna, only to discover the sources of a revolting city that would serve as the very basis for his understanding of psychopathology.

Artists like Koloane likewise stepped out of the studio to face the trepidation of everyday life. There, they reinvented the everyday by establishing the workshop movement – the Thupelo Workshop movement, Greatmore Art Studios, the Community Arts Programme, Culture and Working Life, and later, the Bag Factory. This was the birth of a new arena for composition, of a relationality that cut across discipline and combined the discrete techniques of older forms of studio art. The workshop movement was not only a standpoint against apartheid. It sought to give new meaning to a work of art and also an education in exiting the scripts of violence. Like Koloane, the work of the artist offered life as an antidote to a world overwhelmed by the death drive.

The artist found him or herself in love’s wrong place, in the darkest place that is underneath the lamp, as the Chinese proverb suggests. The struggle to illuminate the world from that dark underbelly of modernity resulted in a tendency in artmaking that I will strongly recommend be included in the archive of “a lover’s discourse”. Apartheid’s defeat, we often forget at our peril, rested with the emergence of art from within those assemblages that were conceived in the workshop movement that Koloane helped to champion and invent. The artist became an artisan of everyday life.

If Koloane’s name serves as a reminder, it is to the extent that it lends itself to the formative experience of an artist who stepped out of the studio, gathered the remains of the everyday, so as to transform scraps of urban life into scattered speculations of holding on to desire. Against the exteriority of violence and uncertainty of the everyday, the struggle against apartheid would entail an effort to hold on to the interiority of self, of finding a place of quiet through which to transform the wonderful collisions of the urban into a semblance of colour and compassion.

Nothing can be more profound than to have one’s senses awakened by the artwork of David Koloane. As a student activist in Cape Town in 1985 on the dusty outskirts of Athlone, Koloane’s images mingled with those of Lionel Davis, Peter Clarke, Sophie Peters; the novels of Richard Rive and the poetry of James Matthews and Gladys Thomas. The mediation of words and images was peppered with sounds of Robbie Jansen, Basil Coetzee, Winston Mankunku and Khaya Mahlangu. It was as if to stay awake, one had to be educated to orient the senses to seeing and hearing above the din of teargas and gunshot.

The artists of David’s generation revealed a texture of urban life that was both intriguing as it was revolting. Like James Matthews short story, “11:50 to Simonstown,” Koloane too would seek to hold on to the motif of movement, of passing time, for a return to the interiority of a bludgeoned subjectivity. If the everyday was a unifying theme across a spectrum of artistic works in the 1980s, its milieu was less that of the conquest of machine over human, but the withdrawal of the subject into spaces of shared reflection, into the workshop, in a bid to remake a life undercut by the rituals of state violence. Koloane formed part of a tradition of composite artists who together composed the soundtracks and images that compelled us to live beyond apartheid.

Koloane, I suspect, realised that the artist needed to always work as an educator, not in the mode of the didacticism of school, but as a composite artist learning and teaching to live beyond the constraints of that which is given to one. If the workshop movement that he helped to build exemplifies this sentiment, we will recall that that very concept that Koloane helped to forge was what ultimately pushed us over the threshold of apartheid.

I do not make this point lightly because the everyday was as revolting under apartheid as it is today. To this end, let me say that I too wake every day to discover a Cape Town that is as revolting now as it was when growing up on the Cape Flats. But the lessons of David Koloane and his generation persist, forcing me to return to my space of education to craft new leases on life. There at the University of the Western Cape, at a historically black university that was placed in a part of the city which had no view and was meant to offer no views, the desire to build an arts education draws inspiration from the struggles that Koloane and others waged to create conditions of art education under apartheid.

It was after all the search for an art education that led him to discover the intensities and conundrums of the everyday, and to reach beyond, always beyond. This is why and how David Koloane becomes an exponent of a lover’s discourse. The need for art education is as pressing today as it was in the 1980s. 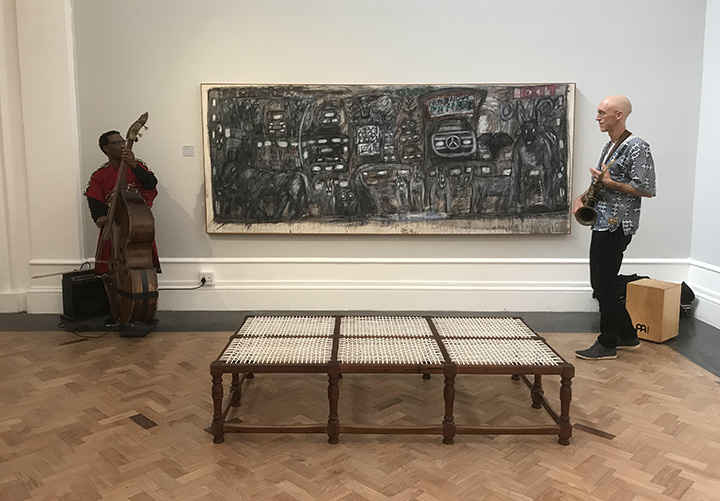 In the 1993 Mgodoyi Series in which a set of mauling dogs set upon each other, we must hear a note of caution of what happens when art education is not a feature of making life. In the series made on the cusp of the birth of post-apartheid freedom, the forgetfulness of how art worked to undermine the cynical plot of apartheid’s attempts to blunt the emotions would make freedom meaningless. The Mgodoyi Seriesreminds me of a comment by a Nigerian curator who, upon taking up a prestigious post at an art museum in South Africa that shall remain nameless, experienced in South Africa, a more intense feeling of what he called “postcolonial cannibalism”.

That warning is what we must read in the Mgodoyi Series. Koloane’s warning in those works sounds a caution of what freedom looks like in the absence of art education. It is a warning not about apartheid, but what is to follow, in the absence of art education. This is what makes me wake up every day as I set off to the University of the Western Cape where, with some extremely dedicated artists and scholars, we struggle to return art to education to remake ourselves.

David, today I want to assure you that the inspiration you provided has not waned. A few months back, a young man by the name of Chumisa Fihla from Masiphumelele visited the Centre for Humanities Research at UWC after being turned away by various art schools around the country. Inspired by his father who is a welder, and the work of Willie Bester, he had set up a workshop in Masiphumelele, building sculptures made from scrap metal.

He found out that the Centre was planning on building an arts programme at a university that incidentally was disallowed an arts education under apartheid. He tells me that he was inspired to approach us when he heard that there were others who were seeking to find ways of crafting an arts education for post-apartheid times. In his search for an art education, I see the very struggle that you undertook in giving us the exemplary form of the workshop movement. Like you, Chumisa knows all too well that an art education is not reducible to a qualification, important though that may be, but a composite quest for developing a view of the world from the perspective of a lover’s discourse.

Thank you to David Koloane for his education. We will work hard to ensure that we do not become mauling dogs, or surrender to the temptations of postcolonial cannibalism. Instead we will commit to learn to create life where everywhere and every day our lives are emptied by the wretched extraction of our worth and value as beings in common.

Much more needs to be said. But for now, I want you to join me in celebrating this purveyor of “a lover’s discourse.”

This piece was published by the Daily Maverick on 3 July, 2019. It is an edited version of Lalu’s remarks at the opening of the Koloane exhibition on 2 June 2019.