Thursday evening saw the Harvard-Radcliffe Collegium Musicum jive their way onto the altar at St John’s Anglican Church in Bellville with a chorus in Xhosa.

The diverse academic choir sang to a church filled to capacity, gifting the parish with a formidable final performance of their South African tour - a concert made possible by the Centre for the Performing Arts (CPA) at the University of the Western Cape (UWC).

“The CPA at UWC opened in 2005 as a platform for the performing arts on campus. Since then community engagement remains a key focus, with the aim of providing quality music education for community music practitioners who lacked access in the past,” said Henriette Weber, Director of the CPA.

“The link with Harvard-Radcliffe Collegium Musicum has come via Matlakale Bopape, and provides a platform within the community to see a university choir of this calibre perform.”

The evening was opened by Father Fred Hendricks from St John’s and was followed by a powerful performance from the Vocal Unity Ensemble - a local choir, led by Jeremy Quickfall.

“The experience was wonderful.  The audience was very warm and welcoming,” said Quickfall.

The Harvard-Radcliffe choristers - under the guidance of their Resident Conductor, Jonathan Mott and Matlakale Bopape - spent twelve hours a day rehearsing songs in a multitude of global languages they had never heard before, including, isiXhosa, Zulu, Sotho, and Tswana. 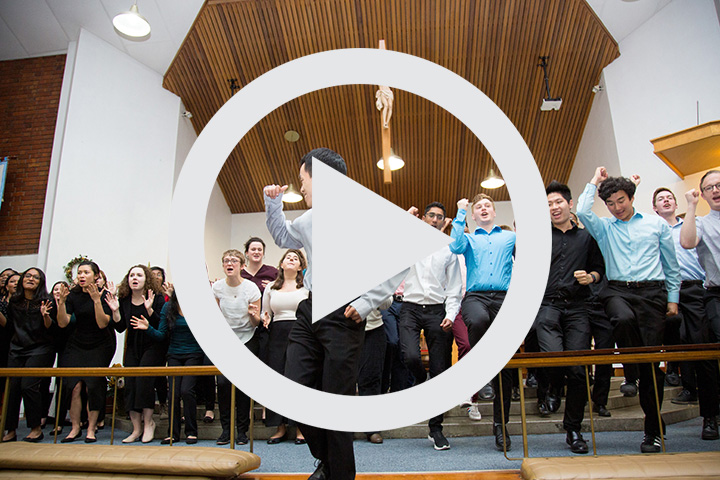 Bopape said: “It has been priceless to work with these students. They sing like they really understand what they’re singing, which is such a pleasure.”

Elbert Gong, bass singer for Harvard-Radcliffe Collegium Musicum, astonished audiences with his authenticity and valour as he belted out the South African struggle song Yini Socialism, backed by members of the choir.

For Mott, the phrase that encapsulated this South African trip for the choir was, “Learning how to learn.”  He said they really got into the directness they had with the music and with the expression and the joy that was within the music.

The evening closed with the St John’s parish singing a hymn in gratitude for the concert performance.  Bopape and the Harvard-Radcliffe Collegium Musicum have been invited to perform again at St John's in June 2020.