Dr Mbombo, an alumna of UWC, visited UWC’s Faculty of Community and Health Sciences (CHS) in Bellville on Thursday, together with NGOs, to engage mainly with students, but also staff and members of the community, about health-related matters ahead of the opening of universities.

Statistics show that young people represent the majority of the Western Cape population, and research suggests that the youth generally don’t use health services. “This is about leaving no one behind. You are the young ones and the ‘young once’. Therefore, you need to learn from us because we don’t want you to make the same mistakes some of us have been exposed to,” MEC Mbombo said.

“The issue of the health of the youth is mostly forgotten. We are fixating ourselves on fixing and repairing broken adults.”

She explained that if “you close the tap” early enough, you will not end up with preventable diseases and illnesses.

According to MEC Mbombo, the real health services related to prevention, promotion and rehabilitation with respect to disease and illness happens in the community, in the corporate sector and at education institutions. “That is where we want to close the tap, because once you go to the clinic that is where you are mopping the floor when the disease is already there.”

The MEC said mental wellbeing and mental health, especially in the post-COVID era, are the main challenges affecting young people. “People don’t understand the baggage you young people carry, not only your own, but other forms also. We have seen high numbers of young people committing suicide. 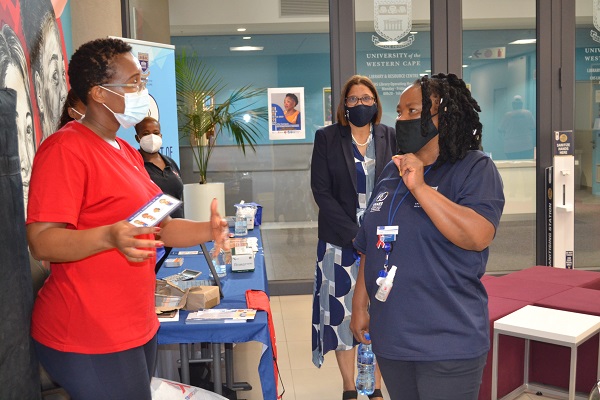 “And, as the department of health, we are saying that you are not alone.  When you feel like you can’t wake up, don’t want to exist or talk to anyone, you must understand that sometimes it is something worthy to explore. You need to get checked because depression can trigger a bad situation.”

MEC Mbombo also encouraged students to accept and be confident about their sexuality. “You are who you are and it has nothing to do with any other person. Whether you wake up one morning gay and become bisexual the next day, its OK.”

Among other “critical” health issues that MEC Mbombo spoke about are sexual reproductive health, HIV/AIDS (which is the major killer among young people), Tuberculosis, substance abuse, and vaccination.

Professor Anthea Rhoda, Dean of CHS, thanked the MEC for the “valuable” information she shared with students and for the partnerships with the Western Cape Department of Health. She encouraged students to think and apply the knowledge as they go out to communities to perform their practical duties. “Before you can be ambassadors and share the health and wellbeing information with the communities, families and peers, it is important to know your own personal health status,” said Prof Rhoda.