The Square Kilometre Array will be the world’s largest and most powerful radio telescope, powerful enough to sense radio waves from objects millions or even billions of light years away from Earth, and to help us understand some of the universe’s deepest mysteries... if we have the right scientific techniques to go with it. And that’s where up-and-coming University of the Western Cape astrophysics superstar Dr Michelle Lochner comes into it.

“New telescopes need new techniques,” she says. “With the next generation of telescopes upon us, my research focus is on rethinking how to do scientific analysis in the era of massive datasets. If you have a dataset of one billion galaxies, how would you find the one that would win a Nobel Prize? I work on developing new machine learning techniques (a branch of artificial intelligence) to automatically analyse data and hopefully make amazing new scientific discoveries.”

Dr Lochner obtained her undergraduate degree in Physics and Electronics from Rhodes University, before moving on to postgraduate studies at the University of Cape Town, where she obtained her PhD in Mathematics and Applied Mathematics under the supervision of Prof. Bruce Bassett. She was a postdoctoral fellow at University College London, United Kingdom, before becoming a Resident Researcher at AIMS South Africa.

“I was born in Johannesburg, which seems like an odd place for an astronomer to grow up, given how few stars there are there!” Lochner laughs. “Nonetheless my love for astronomy was sparked when my father would point out constellations and star clusters. But while I loved astronomy as a kid, I never really thought it was a real job until I heard about the Square Kilometre Array. I went to a talk about this amazing telescope as an undergrad, and it made me realise that I could turn my favourite hobby into an amazing career.”

And what a career it’s been so far.

She won the first ever South African Famelab competition in 2013, and was a top ten finalist in the international Famelab competition (the “pop idols of science”). She received an NFR P-Rating last year, given to young researchers who have the potential to become international leaders of their field - only the third UWC researcher to ever receive the recognition. She also founded and is the director of the Supernova Foundation, a global organisation which supports and promotes women in physics from around the world, and took part in Soapbox Science, sharing the joys of STEM with women and girls outside of academia. Also, she joined UWC’s Department of Physics and Astrophysics as a Senior Lecturer last year... in the midst of a pandemic.

Oh, and she’s just been nominated for a prestigious NSTF Emerging Researcher Award at South Africa’s “Oscars of Science”, recognising her (yet again) as the scientist to watch.

Here’s what Dr Lochner had to say about life, the universe and everything…

What is your work all about (if you had to sum it up in a sentence or three, say)?
I work on applying artificial intelligence techniques to explore enormous datasets from telescopes like MeerKAT, and eventually the Square Kilometre Array (SKA) and the Vera C. Rubin Observatory (LSST) - both under construction, one in SA and one in Chile, providing giant eyes on the far skies. My work helps us make amazing scientific discoveries amongst datasets of millions of astrophysical objects. 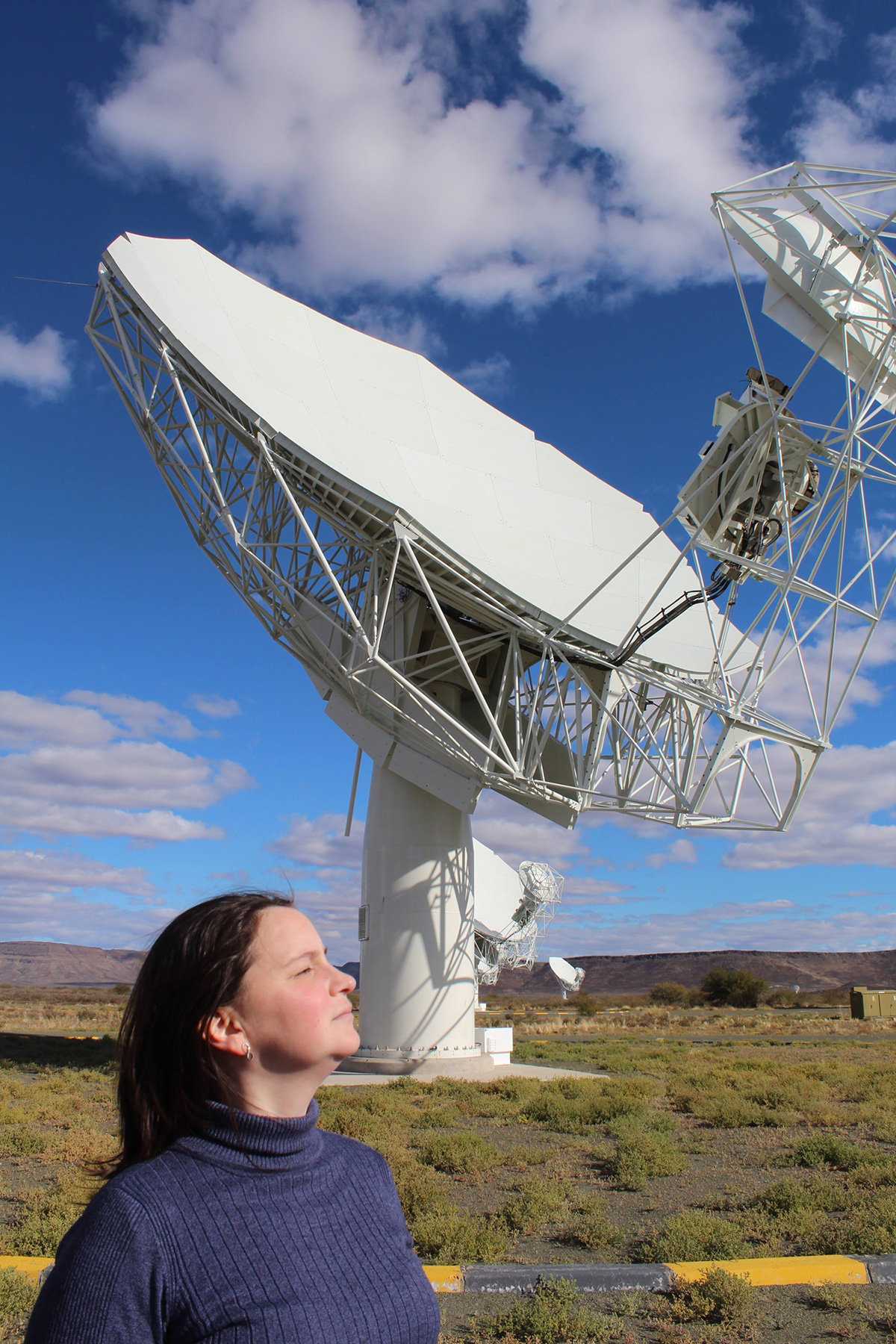 Artificial intelligence? How do you apply that?
Many people aren't aware, or are only vaguely aware, of the powerful artificial intelligence algorithms they come in contact with every day when they're on Facebook, Google etc. They're probably even less aware that the same algorithms are helping us understand more about the universe. Algorithms designed to learn about customer behaviours can also be used to find interesting galaxies or classify types of astronomical phenomena. It goes the other way too. Many astronomers have moved on to apply their data science skills in industry! The data-handling skills and techniques developed by scientists, even scientists in "blue skies" fields like Astronomy, can have a significant impact on the real world.

What’s the best part of your job?
Telling other people about the things that we're learning about the universe. I love Astrophysics because I'm always learning new things and solving challenging problems - the universe is a very interesting place! With MeerKAT and the SKA, South Africa is at the forefront of radio astronomy so it's an amazing time to be in this field. And it's only when I tell other people about my research, the techniques we're developing and the mysteries we're working on that I remember quite what an amazing universe it is we're living in.

What do you do to relax?
I play computer games (often with my husband), play piano or listen to music and cuddle my sweet cats.

What are some of the challenges you’ve experienced?
The hardest thing I've found about research is that, when in school or undergrad, you constantly receive instructions and feedback. In research, much of the time you're on your own. I've often described research as a series of brick walls you have to break through. You get stuck often, but it feels great when you break through. Fortunately there are collaborators to help, but I was surprised at how hard it could be when I got stuck.

Who are your helpful collaborators, then?
I have two really amazing mentors: Prof. Bruce Bassett, who supervised my PhD, and Prof. Hiranya Peiris, who was my postdoc advisor in London. I still actively collaborate with both of them, and rely on them for advice and support. I also have to acknowledge how great the Astro group at UWC have been in welcoming me, especially since I started my new job in the middle of a pandemic!

Any messages for budding researchers considering a career in science?
If you find you are passionate about science or engineering, don't let anything stop you. Never think of yourself as second best. Just keep pushing yourself to compete, and follow your dreams - you have a lot to offer the world!