For two reptile researchers, the answer to the question of how to learn more about reptile diets came from an unusual source: none other than the online social media platform, Facebook.

The two researchers - “the reptile power couple” - Drs Robin Maritz and her husband Dr Bryan Maritz, from the Department of Biodiversity and Conservation Biology at the University of the Western Cape (UWC), had noticed the large number of photographs of feeding reptiles on their own social media feeds. So, in August 2015, together with other reptile enthusiasts, they started a Facebook group to gather all those crowd-sourced posts.

To their surprise, the results from following this technique revealed a mind-blowing discovery: altogether 75% of the predator-prey relationships reported via this social media platform were completely new to science in this field. Also, while an average of only 23 individual feeding records were documented per year for the last century, this new method yielded about 200 per year.

Dr Robin Maritz says: “Our interest is in understanding the functional roles of snakes in African ecosystems. From existing data we know that in the last 130 years of research, Southern African scientists have recorded and published fewer than 3 000 individual feeding records (about 23 per year). By using Facebook, we were able to gather more than a 1000 records in less than 5 years (more than 200 per year), and that is exceptional.”

The duo published the results of the study observing the feeding interactions between trophic levels, in the journal, PeerJ. Their paper entitled, Sharing for science: High-resolution trophic interactions revealed rapidly by social media, is to be released this week.

Dr Robin Maritz, who led the study, says this is yet another example of the use of citizen science to gather important biological information. “The majority of photos shared on the Facebook page were taken by curious members of the public who are not researchers at all,” she says. “The real power we tapped into is the army of camera-carrying observers who simply snapped a photo of something that they thought was interesting.” 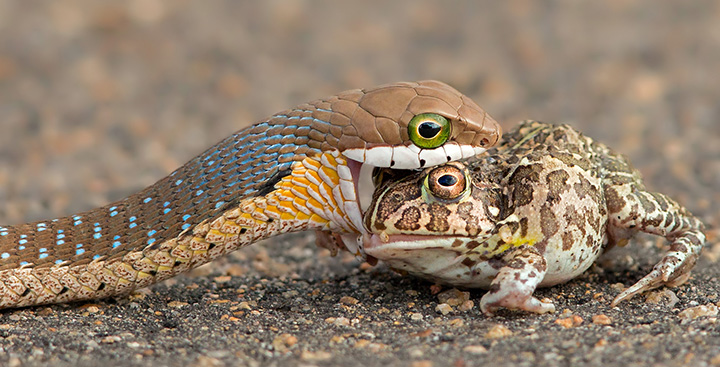 Dr Bryan Maritz, known for his research around cannibalistic feeding among cobras, says: “We are pleased with the results, because this study shows just how useful Facebook can be, especially for the collection of sightings of feeding snakes.” He says the diet of an animal influences nearly all aspects of its biology, but despite this importance, the diet of many animals is surprisingly poorly documented in the scientific literature, and in this instance, snakes are no exception. Snake feeding information, says Dr Bryan Maritz, has an important role to play in potentially understanding how their venom works.

“Globally, it is estimated that close to 100 000 people die each year from snake bites, and several hundred thousand more are impacted by bites that leave them physically or psychologically scarred,” he says. ”With the public's help, we are able to learn far more about how snakes interact with prey species in the environment, and potentially why their venoms work the way they do. This information can directly drive antivenom development.”

Members of the public who would like to contribute to the project can upload their pictures to the Facebook page Predation Records - Reptiles and Frogs (Sub-Saharan Africa), or contact the Maritz team via their website, www.maritzlab.com.