“We all agree that the project of land redistribution in South Africa is an important project - and one that needs to be addressed effectively. But what role do smallholder farmers have to play in that?”

That question, posed by Oxford University’s Professor William Beinart, formed the heart of his public debate with Prof Ben Cousins of the University of the Western Cape’s (UWC) Institute for Poverty, Land And Agrarian Studies (PLAAS) on 21 November 2018, addressing Smallholder Farmers and Land Reform in South Africa: ‘Radical’ vs ‘Realistic’ Perspectives.

“Our real constraint is the prism through which we see agriculture,” he said. “For most of us, that is almost entirely framed around large commercial farming - highly mechanised, very consolidated, losing jobs, and so forth. And we view smallholder farmers in much the same way.” 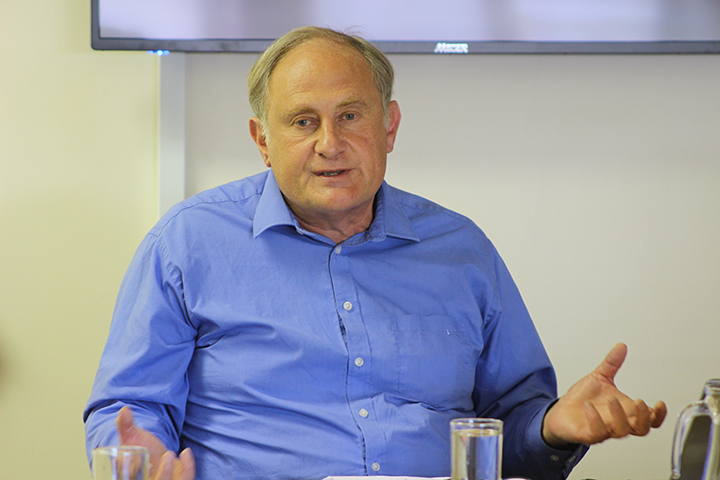 “Smallholders are highly differentiated - firstly by class, and thus degree of capitalisation - and secondly by commodities and agro-ecological region. Job creation is possible if you target land reform carefully - so who will be producing what, and where?”

“I think the effect of making national policy to expropriate would be that commercial farmers would stop investing in the land, pretty much at a stroke,” he said. “And the critical thing for South Africa is to keep capital investment going. Commercial farming has been fairly successful - one of the fastest-growing areas of the economy until very recently - and we shouldn’t discard that without considering the consequences.”

The lively debate - and even livelier Q&A sessions - drew together young and old, students and academics, from UWC and beyond, and from a variety of backgrounds and disciplines ranging from anthropology and economics to philosophy and social sciences.

Questions were raised (and opinions offered) on the role of government in land reform, the importance of redistribution to create a more equal society, the need to address the injustices of the past - and thornier matters like the role of race and class in these kinds of discussions - and whether farming is even a worthwhile creator of jobs.

“We speak a lot about job creation,” said Prof Beinart, “but youth often don’t want to work on farms, by and large - and farmers don’t want to pay them enough to make it worth their while, because it’s just not worth the investment and the risk. So perhaps we should be thinking about what is possible, and what else can actually be achieved with the resources available.”

Of course, this is not just an academic debate, but a very political issue as well - land reform has been implemented for over two decades. The land issue has recently exploded in South Africa, and populist causes have been surging all around the world.

“When it comes to restitution, in the context of colonisation, the charge is absolutely unarguable - justice is on the side of the people whose land was taken and divided up by European powers,” Prof Cousins said. “But taking the land back is not enough; you have to figure out how to take care of the whole population, and feed them. We need to achieve justice, but we need to be pragmatic as well - we cannot fix the wrongs of the past and fail the future.”