South Africa, and some may argue the world at large, is currently experiencing a crisis of conscience. In an era characterised by rampant global inequalities, abject poverty and a worrying resurgence of conservatism and proto-nationalist rhetoric, a question I often ask of myself is: “Is there a left left at the intellectual home of the left?” Jakes spent most of his adult life affiliated with the University of the Western Cape in one form or another, starting as a student in the 1960s, and finally as Vice-Chancellor until 1994. He had christened the University the intellectual home of the left in the 1980s and steered the institution towards a space for curriculum renewal, innovative research and outreach projects. So what would he have thought of the state of public discourse and the apparent lack of humanity in society today? 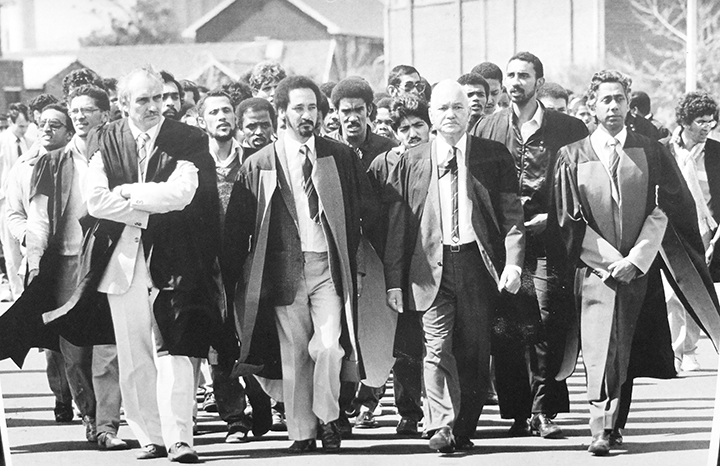 I have been asked to use this space to delve into the legacy left by the late Jakes Gerwel through sharing what it was like to be the son of an intellectual icon and dedicated non-racial “social justice warrior”, to use the parlance of current discourses in the polarised world of media, both social and mainstream, which pits the political right and left against each other in an ideological battle for the hearts and minds of the world’s forgotten and voiceless. His untimely demise in November of 2012 has left a distinct void in the current intellectual discourse in our beloved country; a resurgence of “race” based political rhetoric and mobilisation and ultimately, a less human and markedly less humane conceptualisation of what South Africa, and even the word, should be striving towards.

My father was scaling down his participation in public life from late 2011 towards the goal of taking up a research professorship at UWC. The two of us were looking forward to spending the rest of his days writing articles and op-eds on social transformation, the role of literature in emancipatory praxis, and how cricket could be used as a sensitising heuristic device to better understand institutional underpinnings of bringing about the ubiquitous “radical transformation” of society. Alas, we only got the opportunity to author one conference paper jointly, entitled: “The poor will always be with us?’: Public discourses on social inequality”. A few excerpts of this paper will go a long way towards answering, partly, a few of the questions posed above. Firstly, regarding the “intellectual home of the left”, the following extract from the paper’s preface neatly addresses this:

I am not an economist or development specialist, but one once trained in literary theory, criticism and discourse analysis. The issue of poverty, and more fundamentally inequality, has however been a central and driving theme of one’s thinking and preoccupation even in those non-economic disciplines. Like many of my generation and background, socialist theory, and particularly its Marxist version, was a formative influence in one’s analysis and understanding of “poverty” and one’s views and approach on how to address it. And I use the word “address” deliberately to capture both of its meanings: address the issue not only as in tackling it, but also and equally important as how to speak of it. Marxism and socialism generally concerned itself with the radical eradication of social inequality of which poverty was (but) a manifestation; my kind may therefore have been educated in an intellectual and discourse mould that falsely assumed (or hoped) that poverty is a temporary phase in human history, to be finally overcome by the radical eradication of social inequality. Now we must ask as a post-Marxist question: will “the poor” in fact be with us always, and is the quest for the eradication of poverty a quixotic dream? And what does that then mean for “the poor”, whom ever and how ever they are?

I would thus argue that a cautiously optimistic approach would be the appropriate answer. As the “so-called left”, it is incumbent upon us to still strive towards creating a better, more equitable and socially just future for all the members of the human race. The idea that we as a global community could work together to realise this dream of a better future for all, irrespective of background, ethnicity or heritage is the fundamental learning I have gained from my father. The onus is on us as a species to look past our socially constructed and ideologically informed notions of difference; to focus on what unites us as a human family and to try and establish a social order that encompasses kindness as its overarching ethos. To borrow a cricketing phrase, we must attempt to play straight and remember that nobody is bigger than the game. This requires a reflexive glimpse into our past with the goal of shaping our thinking into a more engaged and constructive space. Again, his words from the paper sheds some light as to his thinking on this matter:

“The poor poor,” I murmured to myself. There was, I must confess, something autobiographical to that sigh of semi-cynicism and resignation. I descend from what is in current parlance the poorest of the poor – a farm labouring family in rural Eastern Cape. What, I wondered then and subsequently often, would my mother and father have thought about these efforts to make them the objects of political programmes? And all of the people of my rural childhood, that community of Xhosa- and Afrikaans-speaking people who laboured and communed, who suffered and survived, who sacrificed and sustained?

What this highlights to me, is that my father, through his self-confessed and unapologetic Marxist social ontology, framed his thinking of structured social analysis as having a human face. A way of seeing the oneness of our complex and often confounding humanity is what made him remarkable. This manner of seeing one’s self in others and their challenges and struggles is what makes Jakes’ legacy an important one. I shall end here with the conclusion of our yet unpublished conference paper, which I think succinctly encapsulates the Jakes we all knew, loved and will hopefully emulate:

Sen [the Nobel laureate in economics] is often criticised for being overly philosophical, but we need a human and humane element to dealing with poverty and inequality without paternalistic judgements, but rather in an inclusive and truly democratic manner. This is to ensure that people are provided with what they want, so they are free to live the lives that they want. Just to reiterate our ideological stance on poverty and inequality, it should be stated here that the most significant and oppressive thing about poverty is the stratification of society into relatively static and separate groups. Perhaps the often misunderstood statement of a First Century revolutionary from the contentious Israel/Palestine region needs a post-Marxist solution. “The poor will always be with us”, but surely we should strive to put an end to this abhorrent state of social and economic deprivation and in this manner, justify our claims at being an advanced and humane species.

The detailed programme is available on www.jgf.org.za, or e-mail Theo Kemp at: theo@jgf.org.za