It’s a dream come true: University of the Western Cape (UWC) rugby star and Bachelor of Arts student Kurt-Lee Arendse has been called up into the Springbok Sevens team to play in Vancouver, Canada this weekend.

Arendse, one of SA’s rising rugby stars and FNB UWC wing, was named alongside Zain Davids to replace the injured duo of Ryan Oosthuizen and Mfundo Ndhlovu as the Blitzboks get ready for the sixth round of the HSBC World Rugby Sevens Series.

The 22-year-old from Paarl played for Boland Under-18 and for Western Province Under-19 before joining UWC in 2017 - starring for the both FNB Varsity Shield and Varsity 7s Rugby teams [and completing his Higher Certificate in Economic Development bridging course]. On the back of being named the Back That Rocks in the 2018 FNB Varsity Shield, Arendse was also part of the South African Sevens Academy team which travelled to South America in January 2019 to play two tournaments, in Uruguay and in Chile. But his dream has always been to crack it into the Blitzboks team.

UWC Director of Sport, Mandla Gagayi, said Arendse's call-up is testament to UWC's mission, as A Place to Grow - From Hope to Action Through Knowledge.

"Kurt-Lee comes from a very trying background and his call will definitely provide him with the opportunity to rise above his socio-economic circumstances to make a better life for himself, his family and his community - and to inspire others to do the same. As UWC Sport we are very proud to have been part of this journey," said Gagayi.

UWC rugby coach Chester Williams believes Arendse’s selection shows that UWC is able to produce quality rugby players who are capable of properly representing their country. “This is an opportunity to tell the world out there that the University of the Western Cape can produce a stream of rugby players who can add value to South Africa.” 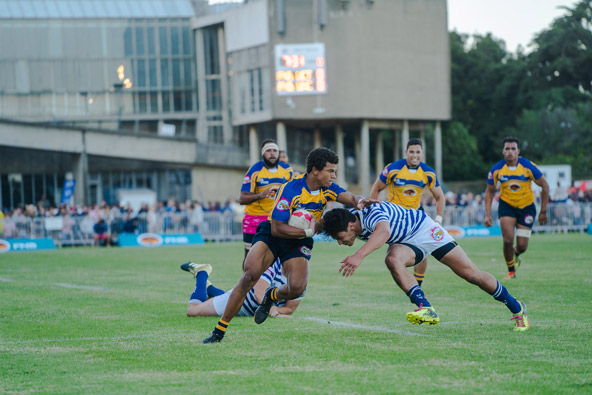 Meanwhile, UWC Rector and Vice Chancellor Prof. Tyrone Pretorius said: "This is wonderful news. The University wishes Kurt-Lee well and his selection to the Blitzboks side is again testimony of the excellent all round academic and sport programme that UWC Sport is gaining a great reputation for."

Though his call-up for the Blitzboks means he will have to leave the University squad, Arendse has left an indelible mark on the FNB UWC team which made its FNB Varsity Cup debut this year.

"We at FNB Varsity Cup are over the moon for Kurt-Lee. He's an amazing player and he showed great talent whenever he played in Varsity Shield, and then in Round One of Varsity Cup. It's a great loss for Varsity Cup, but the Blitzboks are gaining so much. We wish him all the best in the green and gold," said Xhanti-Lomzi Nesi, FNB Varsity Cup Manager.

UWC takes on the FNB Tuks at home this evening. Kick-off is at 18h30 at the UWC Sport Stadium.