It has been 10 years since UWC’s Interdisciplinary Centre for Sport Science and Development (ICSSD) was established, and it has been recognised for its “remarkable contribution” to local, national and international communities.

With late Dean Rati’ Mpofu’s vision of building a better society using sport as a tool, UWC’s Interdisciplinary Centre for Sport Science and Development (ICSSD) started with one staff member’s research and provided only short courses in 2009. Today the Centre prides itself on having produced over 63 postgraduate diploma graduates, 19 Masters, four postdoctorates and a couple of PhDs in recent years. In addition, it is grounded in research, training and engagement with local communities around sport and development, and has joined forces with various international organisations such as the Commonwealth, United Nations and International Olympics Committee and Olympic Academy as well as local, provincial and national government.

To celebrate its first decade, the Centre has been hosting various events this year, inside and outside the University. Among them was the Madiba Colloquium, with all 4 universities in the province, various local and international Umama screenings, the Launch of the Case for Sport Research and the co-hosting of the recent Sport History Conference at Robben Island, which was attended by local and international partners who commended the Centre for its work.

“What is more interesting about ICSSD is that instead of focusing on elite sport, their focus is on how resources and needs can be addressed more fully for development purposes in line with the SDGs, as well by big international organisations and state governments,” said Professor Joseph Maguire from the Loughborough University in the United Kingdom, after participating at the conference.

“Those are the sorts of things we need. We don’t necessarily need big stadia, and we don’t always need gold medalists. But we need to address health interests of human beings and the quality of life of local communities. I think that is what is important about this Centre.”

Prof Maguire added that while the Centre has achieved a lot in its 10 years of existence, it still needs to be further nurtured, developed and resourced.

“The tasks, the issues and the problems are still out there. We need to promote the Centre even more. This is the end of the beginning, not the beginning of the end,” he said.

Another international guest who gave his thumbs to ICSSD is Professor Barta van Reusel from KU Leuven University in Belgium, who was part of a group of academics who helped to set up the Centre. He recalled that it all started when UWC joined forces with a number of institutions from his home country to cooperate on a number of projects. “When those agreements emerged, I thought it would be a nice way to cooperate on the idea of sport having a role in society,” he said.

Prof Van Reusel said in two years his university will celebrate 600 years of existence, and there is not a big difference between it and UWC in terms of dynamics and energy. “It is remarkable what this Centre has achieved, and we are very happy with the Master’s programme which is very difficult to start and takes a lot of energy. We have to realise that this is a unique Centre. It is one of its kind to delve into the role of sport and how it can contribute to social change. My wish is that it can flourish.”

Professor Marion Keim, ICSSD Director, said the Centre is a result of the University’s internationalisation strategy in focusing on sport and development. She recalled that when the Centre was established just before the first FIFA World Cup was hosted on African soil, UWC and its partners wanted something more sustainable than projects. “We have a Centre which is the only one of its kind on the African continent, and we are striving to be the leading Centre in sport and development in the world. We invite other stakeholders to come on board moving forward in the next decade,” Prof Keim said. 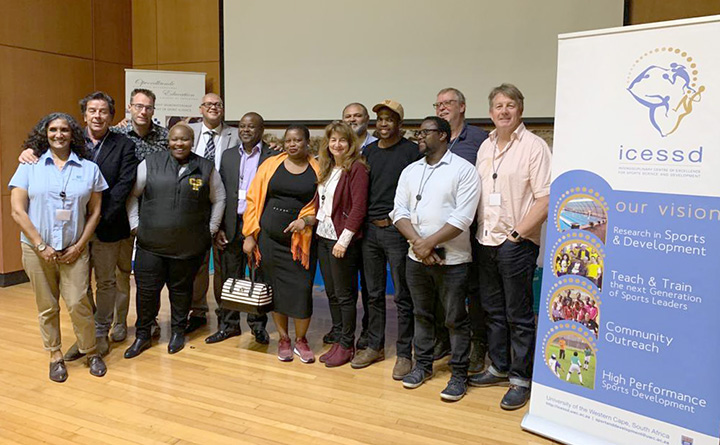