For young married couple Katlego and Bronwyn Mthimunye, the road to graduation wasn’t easy, but the tough journey paid off.

Katlego and Bronwyn - both only 30-years-old - shared tips on how they balanced work, family and raising their six-year-old son Kgethego while working towards a PhD.

On Monday 8 April 2019 Katlego, earned his Doctor of Philosophy from the School of Nursing, while his wife is set to earn her PhD in Child and Family studies at UWC later in the year.

“I had a goal of achieving my PhD before the age of 30, and with hard work, commitment compromise and many sleepless nights I achieved my dream. If you are able to do this, your journey towards earning your PhD will be a pleasant one,” Katlego said. 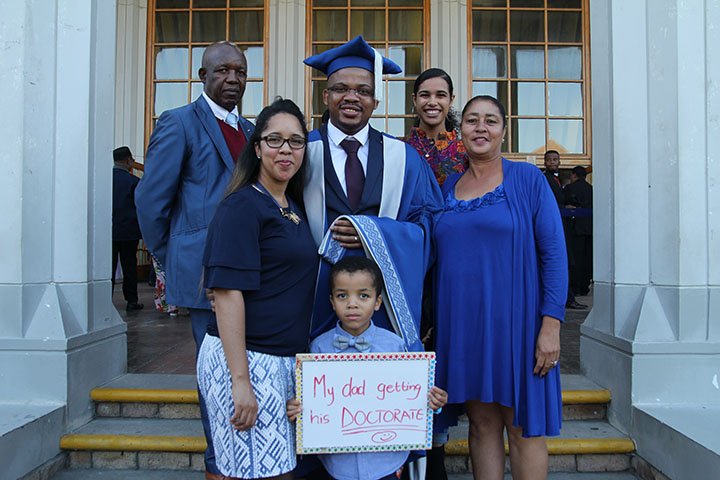 “Doing your PhD can become tough at times, but we played supporting roles for one another when times were tough. We encouraged each other during those times and that is the reason we were able to succeed,” Bronwyn said.

The couple explained that their journey was characterised by endless sleepless nights.

“After spending time with our son and putting him to bed, we would wake up at 12am and work through the night reading and writing,” Bronwyn said.

When they were not buried in their books, the couple spend quality time with their son - taking him on play dates or for his favourite McDonald’s burger.

They met while doing community service working in their respective fields of nursing and psychology in Mpumalanga, and are now married for seven years. Both went on to complete their Master’s degrees at UWC in Child and Family studies and Nursing respectively, and subsequently applied to complete their PhDs.

Katlego completed his PhD on an intervention towards the improvement of academic performance, success and retention among Bachelor of Nursing students at a higher education institution in the Western Cape.

“While doing my Master’s I found that in the faculty of nursing, students struggle for various reasons. When I found out what those factors are I decided to delve deeper into it with my PhD,” he said.

The couple are still deciding what to do after graduation. “We are feeling a bit sad now that we have completed our PhDs, but we will most likely continue doing post-doctoral research in our respective fields,” Katlego said.

From 3 to 9 April 2019 UWC conferred 60 Doctoral degrees, 254 Master’s degrees, 676 Honours degrees, 2131 Bachelor’s degrees and 388 diplomas and certificates. UWC had even more reason to celebrate when news broke that it had been ranked among the world’s top 200 higher education institutions in the very first Times Higher Education University Impact Rankings 2019. The rankings represent a monumental step forward in the way university performance is gauged. Universities across the world were judged for their social and economic impact based on the United Nations’ Sustainable Development Goals. These include academic freedom policies, efforts towards gender equality and taking action against climate change.