Ten years ago, with MeerKAT in the planning stages, the Department of Science and Technology’s SKA South Africa Project issued a world-wide call for proposals to use the future telescope. And now, it’s ready for action: the South African Radio Astronomy Observatory (SARAO) has announced the selection of 38 South African-led projects that will use the MeerKAT radio telescope in the Northern Cape.

“We knew that the growing South African radio astronomy community was keen to use this magnificent telescope in novel ways,” says SARAO Chief Scientist Dr Fernando Camilo, “and indeed we received many good proposals with clever ideas.”

These range from studies of Proxima Centauri, the nearest star to the Sun, to investigations of hydrogen gas, the fuel that makes up stars, half-way across the Universe - and no fewer than six of the projects are led by principal investigators from the University of the Western Cape.

“At UWC we have a very active astronomy group consisting of postgraduate students, postdoctoral researchers, and staff working on a range of exciting topics and projects,” explains UWC’s Dr Ed Elson. “Having access to MeerKAT will allow our group to carry out even more cutting-edge research, and possibly make some brand new ground-breaking discoveries.”

Dr Elson will be the principal investigator on a project that aims to use the MeerKAT array to generate an exquisite image of the neutral hydrogen content of a nearby pair of interacting galaxies, NGC 1512/1510.

“Everyone knows galaxies contain billions of stars, but they also contain a lot of gas that is typically also distributed in a thin disk that is co-located with the stars - this gas is, in fact, the raw fuel for star formation. When two galaxies interact, the associated gravitational processes are best-traced by their gas distributions,” he explains.

“Essentially, we'll be generating a map of unprecedented detail and sensitivity of a very interesting galaxy system that may offer many insights into the ways in which galaxies interact and evolve over cosmic time.”

Prof Mattia Vaccari, who was recently appointed eResearch Director at UWC, will lead a project to use MeerKAT and MeerLICHT to jointly probe the variability of faint extragalactic sources.

“This will be in many ways the first time this has been done, and the joint approach will allow us to clarify the extent and nature of variability in distant galaxies,” he explains. “MeerKAT and MeerLICHT observations also pave the way to joint surveys with the SKA and the Large Synoptic Survey Telescope which will generate very large data rates. This project will thus help South African astronomers to develop multi-disciplinary data science techniques.”

“Astronomy is a multidisciplinary endeavour,” notes Prof Santos, who also heads up UWC’s Centre for Radio Cosmology. “We are lucky that South Africa now has the resources to push this at the international level - and that UWC can play a leading role in the process.”

Prof Santos’s project aims to detect the hydrogen emission from galaxies over large scales - and make maps of the Universe as it was 5 billion years ago.

“We're all very excited by what it might be able to achieve. It is also a crucial step if we want the next generation of students to take full advantage of MeerKAT and the future SKA,” he says. “It is the first step towards a much larger proposed survey that aims to test some of our fundamental assumptions about the Universe.” 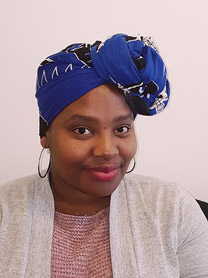 The Next Generation: Developing The Stars Of Tomorrow

UWC’s Physics & Astronomy Department has long believed in the potential of science for transformation - and has focused from the start on training postgraduates.

“We’ve built an environment that encourages and supports students from disadvantaged backgrounds to explore science, to connect with the public, to experience international collaboration, and to contribute to innovation in South Africa,” says UWC’s Prof Roy Maartens, SKA SARChI Chair in Cosmology, who chaired the panel that selected the proposals.

“With these MeerKAT projects, we are taking that a step further - and we are eager to see what will result.”

Bloemfontein-born UWC Astrophysics Master’s student and SARAO commercialisation officer - and recipient of the InspiringFifty 2018 South Africa award - Palesa Nombula is one of those promising young postgrads. She is an executive member of the recently-launched AfAS (African Astronomy Society), which provides a voice for astronomy in Africa and contributes to addressing challenges faced by the continent through the promotion and advancement of Astronomy.

“Africa is still underdeveloped in many ways compared to the rest of the world, and advancing astronomy allows us to contribute to the challenges of the African continent.” she says. “Not only can many South Africans also benefit from the technology and information these MeerKAT projects will produce, but all of humanity benefits when we increase our understanding of the cosmos.”

The opportunities are endless.

“South Africa already has many world class astronomers, but MeerKAT will be the instrument to usher in the next generation of South African scientists,” Dr Elson says. “It's a great time to be involved with astronomy.”

Posted on
9 May 2019
Author
Nicklaus Kruger