Contact Us
< Back
Esteemed astrophysics guru and University of the Western Cape (UWC) academic, Professor Mario Santos, will receive his coveted A-rating at this year’s 2020 National Research Foundation (NRF) Awards.

Prof. Santos also holds a SARChI Chair in Cosmology for Multi-Wavelength Data and is the director of the UWC Centre for Radio Cosmology. The South African Research Chairs Initiative (SARChI) was established in 2006 by the Department of Science and Technology and the NRF to attract and retain excellence in research and innovation at South African public universities. 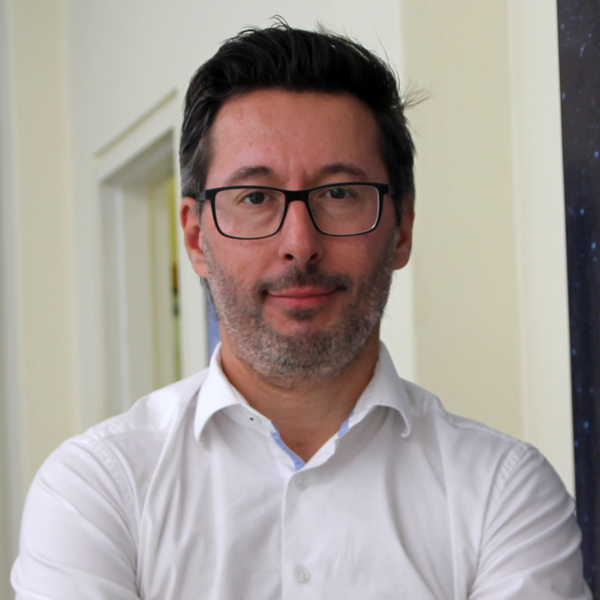 The NRF Awards celebrate South African research excellence, honouring only the top researchers in the country for their contributions to knowledge-creation and dissemination. To become an NRF A-rated scientist, one should undertake top-quality, internationally-recognised and field-transforming work.

Prof. Santos thanked his colleagues: “This wouldn’t be possible without all the support from the University and the freedom I’m given to pursue my research. It is also great to feel that I’m contributing to the visibility of UWC as a top research institution.”

Prof. Santos is known for his involvement with the Square Kilometre Array (SKA) project which will build the world's largest radio telescope. He is also very focused on using the MeerKAT telescope, built in South Africa.

“It is an amazing instrument and we have a unique opportunity here in South Africa to lead the international effort in using Meerkat and the future SKA to probe our Universe,” says Prof. Santos.

It is evident that he enjoys his line of work. “Cosmology studies the beginning, content and evolution of our universe, and it’s a perfect laboratory to test some of our most fundamental theories of Physics.”

“There can also be practical spinoffs from the software and data analysis methods we develop. In fact, several of our students have taken jobs in the industry thanks to the know-how they acquire during their Master’s or PhDs. This is important as we move towards a knowledge-based economy. And we shouldn’t neglect the powerful attraction of Astrophysics in bringing students to the field of Science and Technology,” says Prof. Santos, who comes from Portugal.

“Moving to South Africa allowed me to work closely with the MeerKAT telescope and surround myself with a great team. We have been actively working on turning the large amount of data coming from MeerKAT into sensitive measurements of the tiny signal that comes from hydrogen atoms in the Universe, 5 billion years ago. It’s a huge task, but I’m confident we will achieve it soon,” said Prof Santos.

His main area of research is Observational Cosmology - in particular, he is studying how the next generation of large radio telescopes, such as the recently built MeerKAT and the future SKA, will be able to answer fundamental questions in Cosmology, from the nature of dark energy or the physics of the primordial Universe, to the process of Reionization when the first stars and galaxies of the Universe were born.

Prof Santos has published extensive work and done some of the first large-scale simulations of the period of the Universe when the first stars and galaxies were born. He has also developed new observation techniques to use telescopes such as MeerKAT and the SKA to probe Cosmology.

Prof. Santos is directly involved with surveys using MeerKAT and is a member of the HERA experiment as well as SKA1-MID and SKA1-LOW working groups. He is the former chair of the international SKA Cosmology Science Working Group, and is currently a member of the SARAO Users Committee and the Director of the Centre for Radio Cosmology.