Contact Us
< Back
One of South Africa’s most respected figures is celebrating his 90th birthday today. At the University of the Western Cape, where Desmond Tutu served as Chancellor for twenty-five years, we are celebrating a living legacy of inspiration and hope - and doing our best to follow his example.

“Archbishop Desmond Tutu is one of those rare personalities whose greatness inspires rather than diminishes,” said Prof Tyrone Pretorius, Rector and Vice-Chancellor of the University of the Western Cape (UWC). “His strength of character shines through in his decades of resistance to government oppression and corruption, and in his ceaseless moral leadership and quiet compassion for the suffering. And yet it feels like our beloved Arch is much younger than his 90 years - there might be something to this activism thing after all!” Desmond Mpilo Tutu needs no introduction. Born on 7 October 1931 in Klerksdorp, in the erstwhile Transvaal, he is a Nobel Peace Prize Laureate celebrated around the world for his role as an anti-apartheid campaigner, a social rights activist, and a man who united people from all walks of life through his commitment to justice, and the ideals of ubuntu.

But it is also worth celebrating his commitment to education and to activism - a commitment he proved when he took up the mantle of Chancellor of the University of the Western Cape in 1987, a role he subsequently held for a quarter of a century (UWC’s longest-serving Chancellor).

“We are working for a new South Africa and we are committed to non-violence,” he said in his acceptance speech. “The University of the Western Cape is a first fruit, a promise of what that new South Africa could be like. Let us go for it!”

And go for it they did.

Together with UWC’s then-Rector, the late Jakes Gerwel, Tutu helped UWC chart a course through the turbulent eighties as the intellectual home of the left, and subsequently helped the university find its way in a new world where quality education could change the lives of students from all walks of life. 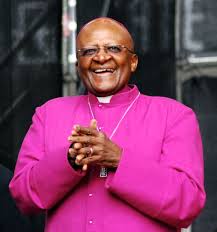 “His service as chancellor for the University of the Western Cape over an unprecedented 25 years helped to build the foundation of what we are today,” Prof Pretorius noted. We’ve gone from a Bush College to an engaged research-led, learning and teaching university that is ranked among the world’s finest - and we couldn’t have done it without his leadership.”

And that leadership did not end when he took up his well-deserved retirement.

In 2014, UWC launched the Desmond Tutu Centre for Spirituality and Society, since renamed the Desmond Tutu Centre for Religion and Social Justice. Located within the Centre is a research chair of the same name. The Chair was established through an endowment from the Lund Mission Society in Sweden, and in August 2016 Professor Sarojini Nadar was appointed in the position. UWC is extremely proud that in 2019, Professor Nadar was awarded a prestigious Tier 1 SARChI Chair supported jointly by the Department of Science and Technology (DST), the National Research Foundation (NRF) and the Lund Mission Society (LMS). Since her appointment as a SARChI Chair, Prof Nadar has developed the Chair and the Centre as an intellectual hub to honour the life and witness of the Arch. Postgraduate students and research fellows working under the auspices of the centre focus on the ways in which religions and faith traditions challenge or hold resources for social justice imperatives that produce sustainable societies. Prof Nadar (pictured with Tutu) said: “Archbishop Emeritus Tutu has helped us develop a mature consciousness about the role of faith in matters of social justice. We are inspired by his contemplative social praxis for justice, which connects the physical, intellectual, and spiritual within radical communities of love. The research being produced under the auspices of the Chair and Centre encourages us to shift our perceptions of a “meek and mild” and domesticated Desmond Tutu that seems to dominate the contemporary popular imagination. Instead a feisty, “rabble-rouser”, trouble-maker for justice and peace is promoted.

"As we celebrate nine decades of his life and witness, we are mindful that his multiple accolades have come at great cost and personal sacrifice. We can only marvel at his fortitude and resilience, but we should also pledge to help create a world where the presence of justice will alleviate the romanticisation of Black resilience,  and instead foster lifegiving spaces of rest, hope and joy!”

Tutu’s opposition to corruption and selfishness did not end with apartheid. He has dedicated his life to campaigns that stand in opposition to pressing issues such as HIV/AIDS, tuberculosis, poverty,  racism,  sexism, homophobia, and transphobia, among many others.

“Forever caring for his flock as a shepherd, Desmond Tutu has taught us how to really love people in a selfless and sincere manner - and to inspire them to love one another,” said The Most Reverend Thabo Makgoba (pictured, below), his successor as Archbishop and as UWC's Chancellor. “He embodies the spirit of ubuntu, recognising the strengths and vulnerabilities in himself and in others, and helping them to recognise their common humanity and their interdependence and equality before God. Always willing to renew and anxious to reform, resuscitate and rebuild, never shy to stand up for what’s right when the powerful are wrong – you continue to set an example for us to strive towards. Happy birthday - and may there be many more!”

Now, more than ever, the University of the Western Cape is challenged to demonstrate that it is capable of competing with the best and of playing a prominent role in the intellectual, social and economic life of the nation - and of providing the kind of moral leadership that can guide us to a better future.

“The Arch has always been a profound example of humanity, humility, humour and grace,” Prof Pretorius said. “He taught us all that we can only be our true selves if we help others be their true selves, and that justice, truth and forgiveness can work together for a better world. Happy birthday, Arch!”